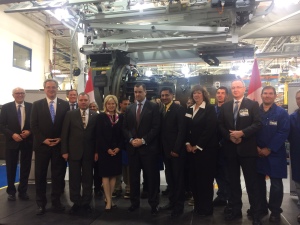 The following is a statement by Mayor Bonnie Crombie on today’s announcement of $300 million in funding for aerospace company, Pratt and Whitney to build the next generation of jet engines:

“I was pleased to join Minister James Moore, representatives from Pratt and Whitney, and the Ward 5 City Councillor, Carolyn Parrish this morning to welcome the federal government’s announcement of a $300 million investment in Mississauga-based aerospace company, Pratt and Whitney to develop the next generation of environmentally-conscious jet engines.

“This investment will create over 1,500 jobs, as well as close to the same number of indirect jobs, many of them right here in Mississauga. It will continue to bolster the already dynamic and robust aerospace industry in our City that currently employs over 24,000 people in high quality, value-added jobs. As well, it will position Mississauga as a hub for aerospace and advanced manufacturing for years to come.

“Pratt and Whitney are leaders in the aerospace industry, with a history that dates back almost a century. Located in Mississauga since 1979 they now employ over 900 people and conduct over 45 per cent of their research and development (R&D) right here in Mississauga.

“Today’s announcement is further proof that Mississauga is open for business and remains an attractive destination for new business and for existing businesses to expand. These investments will help us move Mississauga forward.”