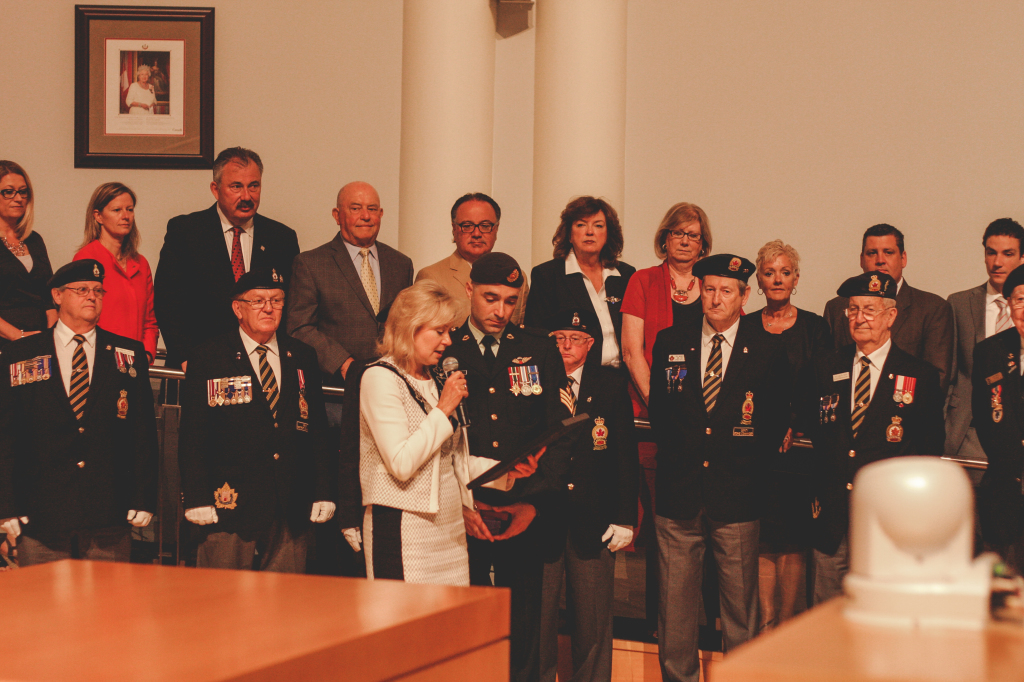 During the Wednesday, June 10, meeting of City Council, Mayor Crombie and Members of Council honoured Sergeant Oliver M. Carrubba (retired) of the Canadian Armed Forces with two distinctions: the Rotation Bar and Commander-in-Chief Unit Commendation. Mr. Carrubba is a resident of Mississauga and a Transit Operator with the City of Mississauga. The following is a statement by Mayor Crombie:

“Council and members of our community gather this morning because we have a hero in our ranks at the City of Mississauga, and his name is Sergeant Oliver M. Carrubba, Retired.

“Mr. Carrubba; his wife Lisa; and their adorable son Marco, are residents of Mississauga.

“Mr. Carrubba is an employee with the City of Mississauga.

“He is one of the many professionals in our Transit Department working as a Transit Operator.

“What you may not know, is that Mr. Carrubba is also a 12-year veteran of the Canadian Armed Forces.

“He was stationed at the Canadian Forces Base Petawawa.

“Mr. Carrubba climbed the ranks to Section Commander of the Engineer Field Section prior to early retirement.

“Mr. Carrubba fought to safeguard the unwavering Canadian values of peace; respect for the rule of law; and full democratic participation.

“It is only fitting that we honour him today here in Council Chambers – the seat of our local democracy.

“This morning I, along with Members of Council, will present Mr. Carrubba two distinctions.

“The first is a Rotation Bar, celebrating his multiple tours of brave duty.

“The second is the Commander-in-Chief Unit Commendation. This national honour is bestowed upon our brave men and women in uniform who have come under direct fire in times of conflict.

“During August and September 2006, the 1st Battalion, The Royal Canadian Regiment Battle Group of Petawawa, Ontario, played a decisive role in one of the largest ground combat operations in NATO history.

“Deployed to an area of Afghanistan with fierce enemy resistance and extremely difficult terrain, the members of the battle groups resolutely defeated a well-coordinated insurgent force in the area surrounding Kandahar City.

“Succeeding where larger forces had failed, they prevented the enemy from realizing their goals of capturing the city and weakening international resolve and cohesion.

“Mr. Carrubba, there are simply no words that can convey our sincerest appreciation for the sacrifices you and your family have made.”