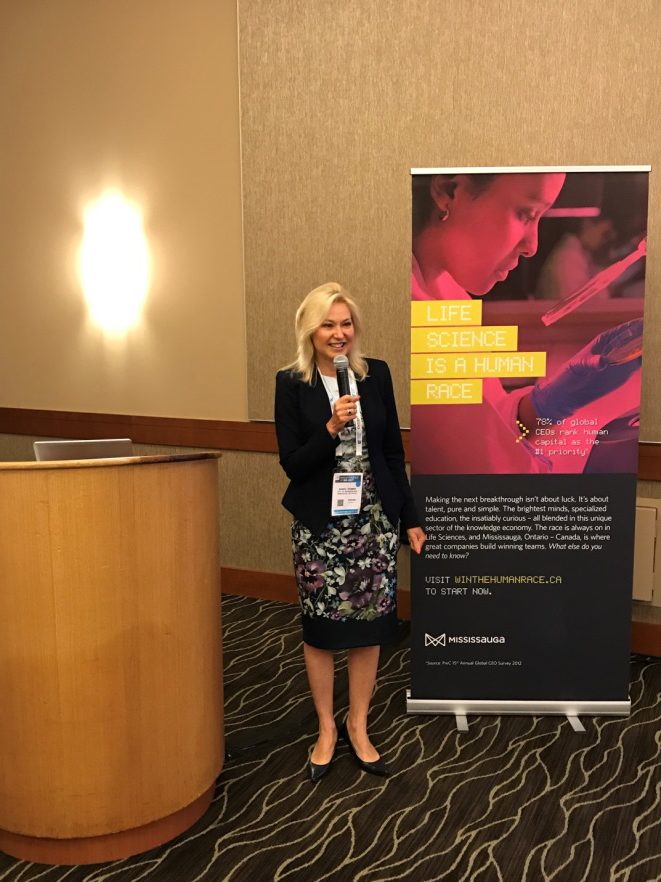 Although today was the last day of the conference for the Mississauga delegation, it was also the busiest. The morning began early with a breakfast hosted by the City of Mississauga for our local businesses and those looking to expand to Mississauga. Our city is one of the only cities at the conference to host such a breakfast, which speak volumes about our reputation in this sector. Over 30 businesses, including Novo Norodisk, Accelera, Astra Zeneca, Intrinsik, Glaxo Smith-Klein, Therapure, Canadian Centre for Regenerative Medicine, and Shire attended the breakfast, along with industry representatives from organizations like BioTalent Canada.

I delivered opening remarks, which were followed by a presentation by Avtar Sodhi, our Life Sciences sector manager of our 5 year Life Sciences Strategy. As the only Ontario municipality to undertake such a strategy, there was a great deal of interest in what we had to say. You can watch the full video of the presentation, here: https://www.facebook.com/bonniecrombie/videos/10158833018115371.

The strategy focuses in large part on talent attraction and retention, because highly skilled, talented employees are highly sought after by life sciences companies. In fact, it is a key plank of the Canadian life sciences advocacy proposition.

While at the breakfast, BioTalent Canada discussed their new initiative to develop university and college curriculum in GMP to ensure that new graduates have the skill set to meet the demands of life sciences businesses. In fact, Rob Henderson of BioTalent Canada spoke at length about how Mississauga’s new life sciences strategy dovetailed with the industry’s push for talent development. In other words, we are working toward the same goal.

The breakfast session featured an open discussion forum to hear feedback from businesses and the industry. Of note was the overwhelming ask by Mississauga companies for increased investments in transit networks. With a growing, younger workforce, attracting talent to Mississauga is becoming more difficult. This difficulty is exacerbated by the lack of rapid transit to areas such as the Meadowvale Business Park. The businesses stressed the need for all-day, two-way GO Train service on all three lines, especially the Milton Line. I discussed our Missing Link plan that will make this happen. The businesses were thankful for the Hurontario LRT and were impressed by Mississauga’s rapid transit plans as shown in the Mississauga Moves map below.  I have encouraged them to join our public advocacy efforts for increased investment in rapid transit, in particular two-way, all-day GO service on the Milton Line, to grow our local economy and by extension, their businesses in Mississauga. 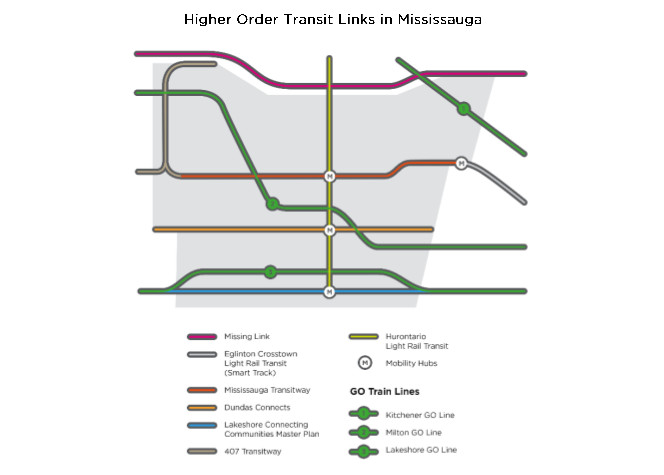 Following our breakfast, I attended the Ontario Investment luncheon, featuring Minister of Research, Science and Innovation, Reza Moridi and Chief Investment Officer in Ontario, Allan O’Dette. Minister Moridi and O’Dette talked at length about Ontario being open for businesses and the investments that are being made to attract new business. While at the lunch, I had the opportunity to meet Ana Paula Branco of BioLab. 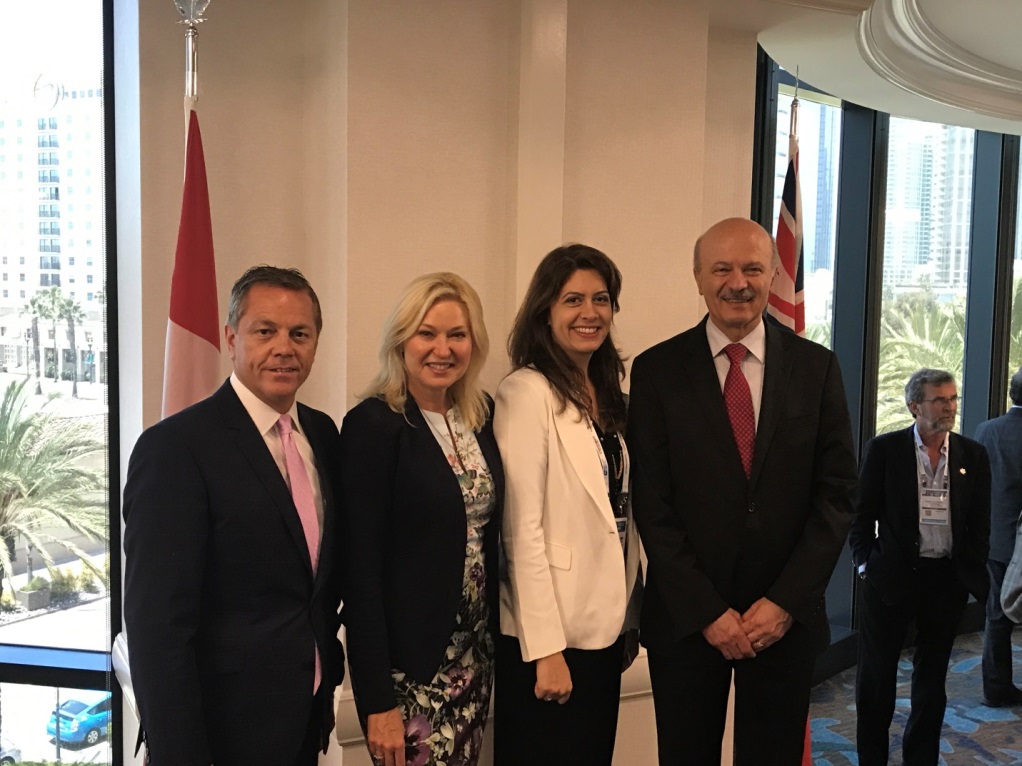 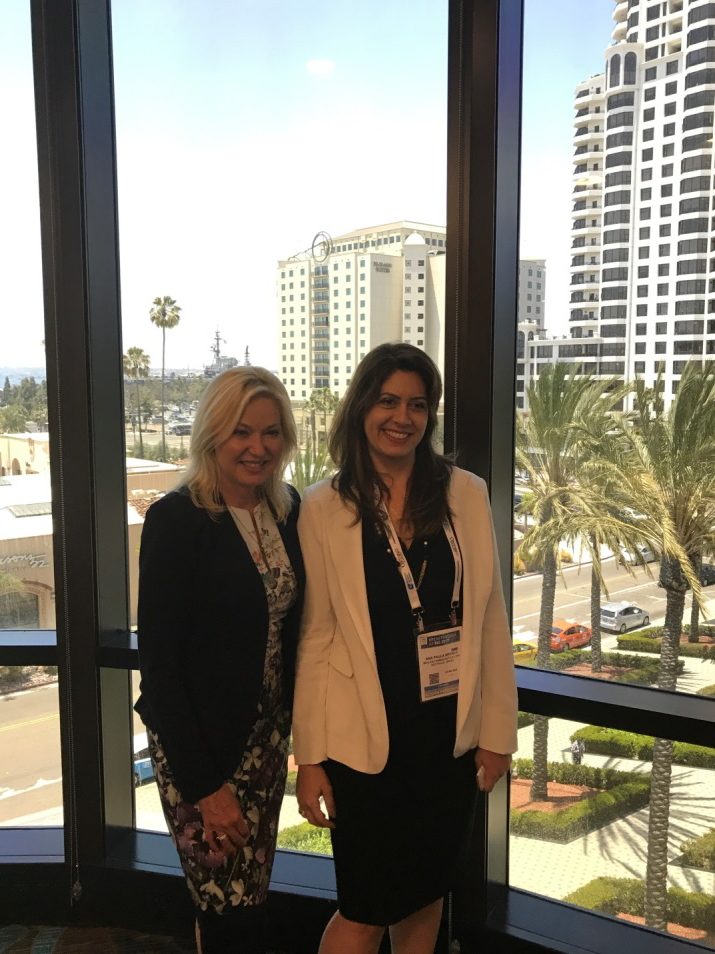 With Ana Paulo Branco of BioLab.

I have spoken at length about BioLab and their recent decision to invest in Mississauga. In fact, it was at the BIO Conference in 2015 that I first met BioLab and began the process, along with Ontario Investment to convince BioLab to come to Mississauga.

While at the luncheon, I also had the opportunity to speak with Minister Moridi about our life sciences strategy and formally present him with his own copy. The feedback from the Minister was incredibly positive and our efforts to build a life sciences cluster in Mississauga were recognized by the Minister at the 300 person luncheon. 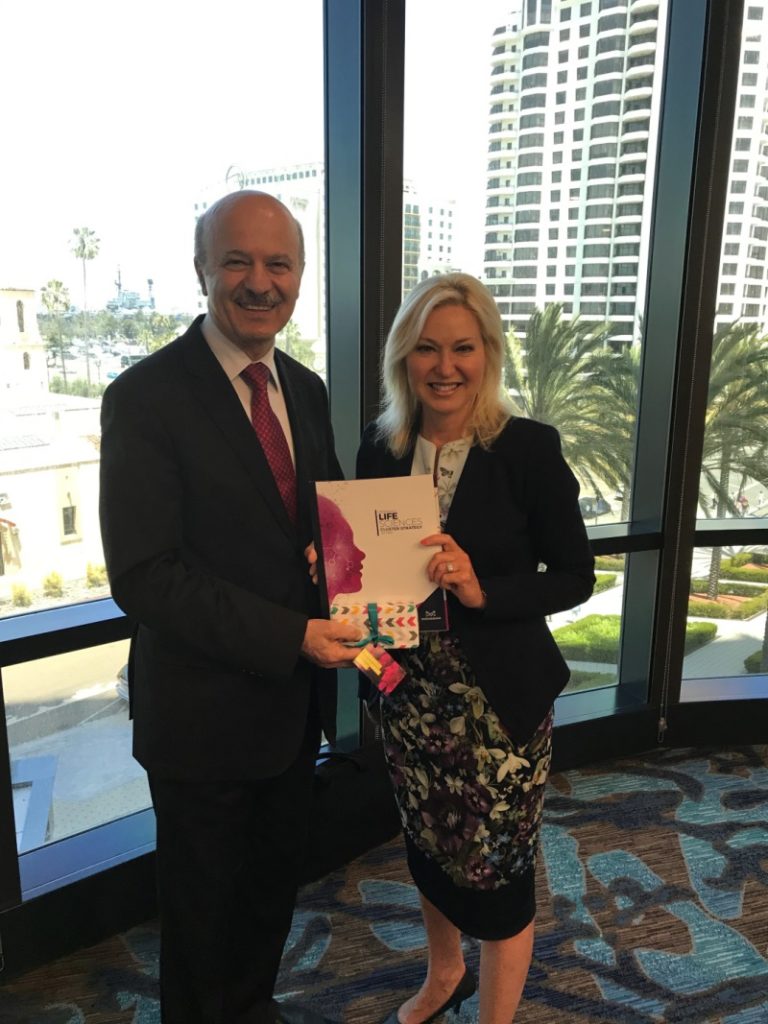 While at the luncheon, I also had the opportunity to meet with Melinda Richter of JLabs, which is the innovation arm of Johnson & Johnson. JLabs focuses on providing a platform where emerging companies can transform the scientific discoveries of today into the breakthrough healthcare products of tomorrow. Melinda and I agreed that I would visit JLabs in Toronto upon my return and discuss ways we can work together in Mississauga. 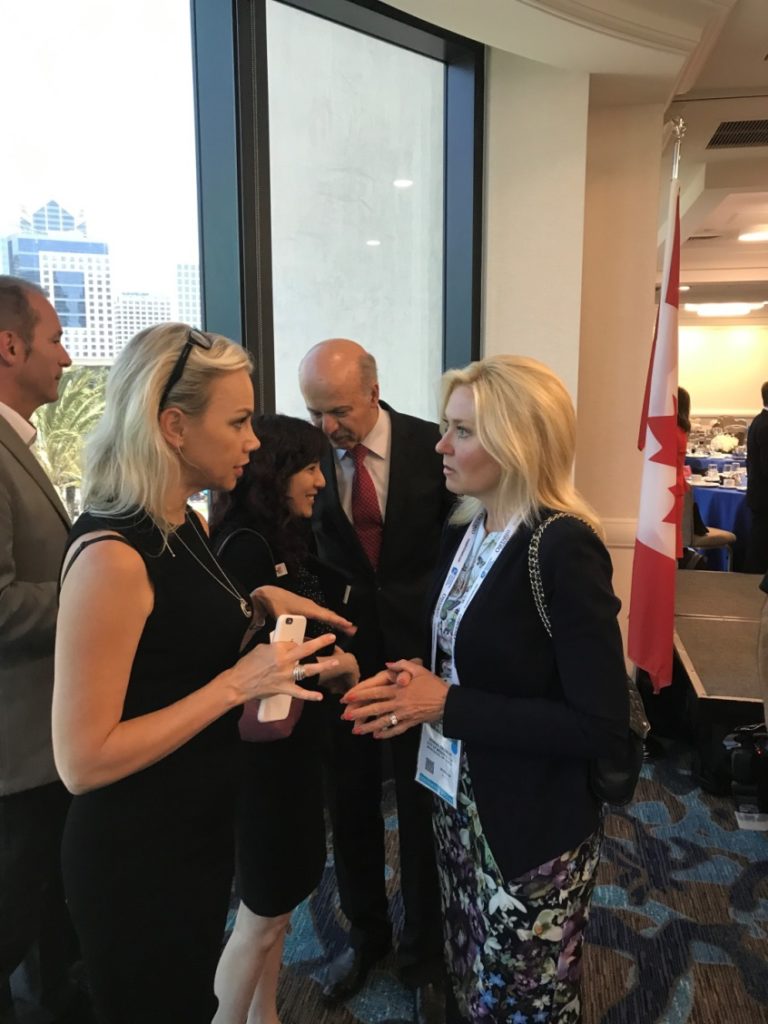 With Melinda Richter of JLabs

Following the luncheon, I paid a visit to the Therapure booth on the convention floor. Therapure is a growing biologics firm in Mississauga. They are big champions of our city and strong supporters of our new life sciences cluster strategy. At the same time, we are also supportive of their growth and are working closely with them on growing our sector. 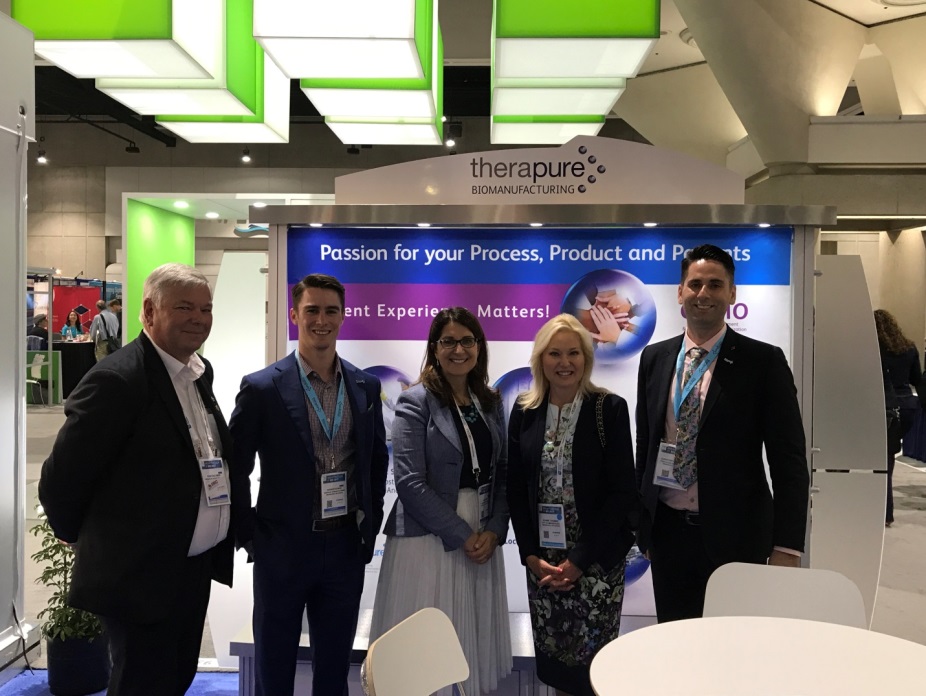 With the Therapure Team at their BIO2017 booth.

I also had a chance to meet with the Canadian trade commissioner in Boston, Christine Sarkisian. Boston is home to one of the largest life sciences clusters in the United States and is one of the jurisdictions that Ontario is direct competition with. We learned a great deal about the development of this cluster and the need for a coordinated strategy. Like Ms. Kuroiwa, the trade commissioner in Japan, we also armed Barbara with information about Mississauga’s life sciences sector and our new cluster strategy. 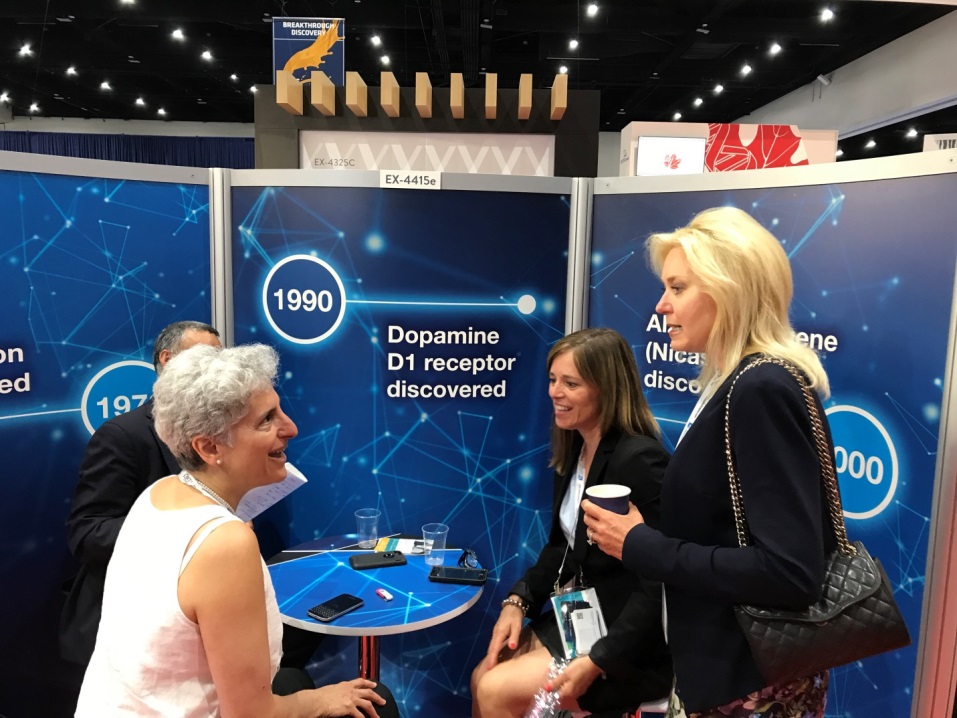 BIO2017 was incredibly successful for Mississauga. I do not attend many industry conferences, but consider it important to attend this one. This is due in large part to the emphasis we have put on developing the life sciences sector; our new cluster strategy; and the critical role Mississauga plays in the Canadian life sciences ecosystem in attracting new businesses and helping existing businesses expand. As I’ve said previously, it is important that I attend to show our local life sciences companies, as well as those looking to invest in Canada, that the local government supports their operations and is committed to their success.

I want to thank Bonnie Brown and Avtar Sodhi of our Economic Development Office and their teams for planning a successful BIO2017 itinerary. Among EDOs across the province, ours stands out. I also want to thank all of our companies for their continued engagement and support of our activities, in particular our life sciences strategy. Without their cooperation and collaboration, this strategy would not be possible. Until next year.