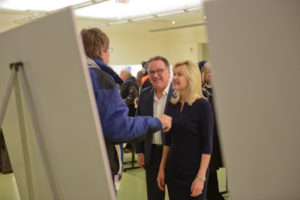 Waterloo – We are committed to using proven best practices, implemented by other major cities and regional governments, like here in Waterloo Region, as we work with Metrolinx to ensure the successful construction of the Hurontario Light Rail Transit (LRT) and our commitment to build regionally-integrated transit, Mississauga Mayor Bonnie Crombie said today.

Waterloo Region was chosen for a site review because construction for both the BRT and LRT began in the summer of 2014 and is well underway.

“As we look toward Mississauga’s promising future, Council and staff will ensure we closely examine professional best practices and lessons learned by others as we work to meet the needs of our growing city and the priorities of our residents – especially when addressing the urgent need to break gridlock and build public transit.”

In July Mayor Crombie joined a Mississauga delegation of Council and senior staff that undertook a two-day site review of the Minneapolis-St. Paul METRO transit system which operates an extensive network of LRT and BRT lines.

Some of the most pressing priorities we must address have to do with how we move people, goods, services and ideas, and how we develop to meet the needs of new residential and commercial investments, Mayor Crombie said, adding that “over the next two decades, Peel Region will need to accommodate approximately 150,000 jobs and over 300,000 people, many of which will be right in Mississauga.”

Yesterday Mayor Crombie and Councillor Nando Iannicca joined City of Mississauga and Metrolinx Staff for a Hurontario LRT Open House with members of the public. Mayor Crombie and Councillor Iannicca also held Ward 7 Community Office Hours that evening where they met with residents about issues like public transit. A number of community consultations have already taken place to further engage residents about the progress of the Hurontario LRT.