After an overnight flight, we began our meetings today in Santiago, Chile. It is a beautiful city, surrounded by the snow-capped Andes Mountains. It is winter here, but the temperature hovers around 10 degrees during the day. There is a very European feel to this city and a much different feel than São Paulo.

At our first meeting we had the pleasure of meeting with Pedro Reus Munoz, the International Director of SOFOFA, otherwise known as the Federation of Chilean Industry. It represents about 40% percent of all businesses in Chile and has been operating since 1883. Our delegation had the opportunity to present to over 25 of Chile’s top business leaders and inform them about the benefits of expanding and investing in the GTA. In particular, I spoke about the advantages of locating in Mississauga. Our presentation was very well received by those in attendance; and it looks as if we have made a positive first impression in the Chilean business community. 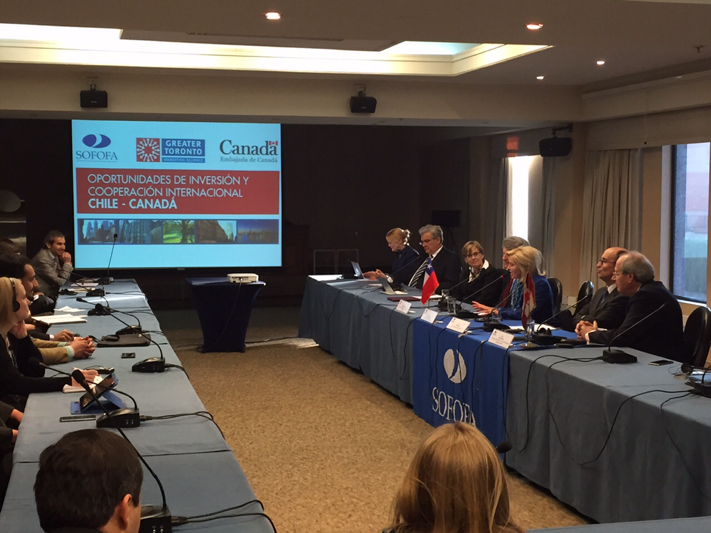 Presenting to SOFOFA about Mississauga’s strengths and the benefits of locating and investing in the GTA. 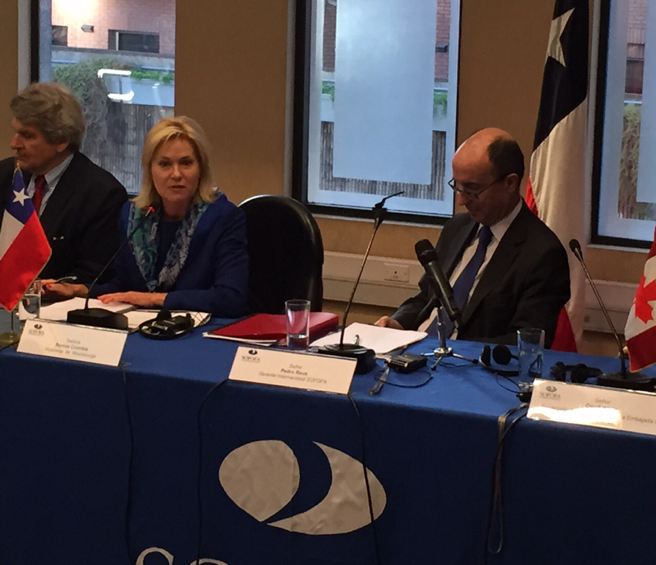 Presenting to SOFOFA about Mississauga’s strengths and the benefits of locating and investing in the GTA.

Following this meeting, we were provided a briefing about the country of Chile and the current and economic conditions at the Canadian Embassy by Canada’s Trade Commissioner in Chile, Patricio Canete. Chile is a much different marketplace than Brazil, due in large part to the commitment by the country to free trade. In fact, since 1997 Canada and Chile have enjoyed a free trade agreement that has resulted in a trade surplus for Canada. Chile has the 11th largest investment inflow of any country (Canada has the 3rd most investment in Chile of any country), a ‘AA-‘ credit rating, and until recently, economic growth in the range of approximately 6% annually. The country has traditionally been a strong place for Canadian companies to invest, particularly in the mining sector, however we do a great deal of importing from Chile – mostly wines, produce, and fish, along with mining technology. The GTA first began its work in South America in Brazil in 2010 and since then we have seen a great deal of investment by Brazilian companies into Canada, with much more to come. From our initial meetings, I am confident the same will be true of Chile in the coming years. When we raise the benefits of the GTA and Mississauga, there is a great deal of interest.

In the afternoon we had three consecutive meetings with a variety of industries. The first was with Cial Alimentos Company, a food packaging company looking to grow its business internationally. As the 2nd largest food and beverage cluster in North America, the GTA, and Mississauga in particular is uniquely positioned to assist Chilean food and beverage businesses with their international expansion. Over 23,000 people work in this industry in Mississauga and we are home to some of the world’s leading food and beverage companies, including PepsiCo.

Following Cial Alimentos Company, we met with Masisa, a wood mouldings manufacturer, who already sells its products through some of Canada’s largest distributors, including Home Depot. They have a strong understanding of the Canadian marketplace and in the coming years are looking to make an investment in our country. We will continue the conversation with Masisa and continue to promote the GTA and Mississauga as a desirable place for their Canadian expansion. With access to northern Ontario timber mills, as well as two in the GTA, Mississauga is well positioned to be the home of a company like Masisa.

Our day concluded with a meeting with Carlos Busso Vyhmeister, the President of ACTI, the country’s leading Information Technology association. As I have noted in previous posts, the GTA is home to a robust digital media and ICT cluster; in fact, over 50,000 people work in ICT or digital media in Mississauga alone. Carlos was intrigued by Mississauga and the GTA and is in discussions with his member companies about the possibility of investing north. Our Economic Development Office will continue to work with Carlos and his member companies to encourage investment in Mississauga. 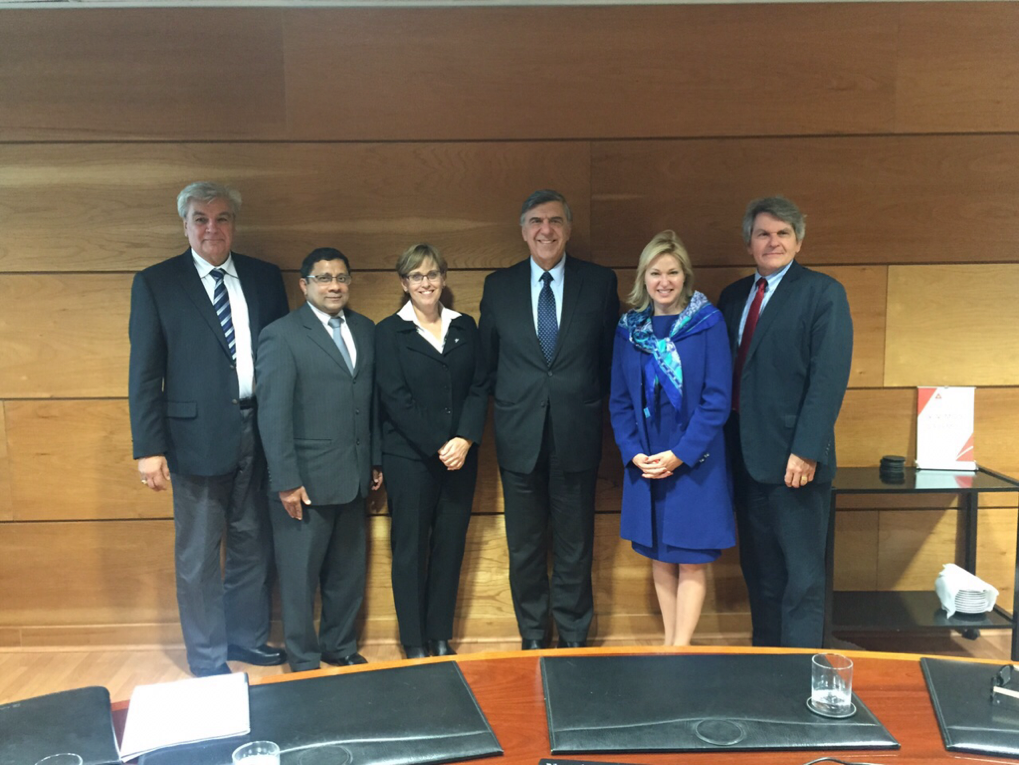 While this is the first time Mississauga has been in the Chilean marketplace, the initial response to our message and our proposal to invest in our city and the GTA has been incredibly positive. Unfortunately, due to the short length of our trip, I believe we are only scratching the surface. However, given Canada’s strong relationship with Chile, our history of free trade, and the growing economy in this country, I believe we are well positioned to attract Chilean investment to Canada and strengthen our ties with this country. There are far more similarities than differences between our country and I’ve heard twice now from local Chileans that they see themselves as the “Canada of South America.”

Over the weekend we will tour the city to gain a better appreciation of the culture, the public art, and the history of Santiago. On Monday, we will again have a full day of meetings. 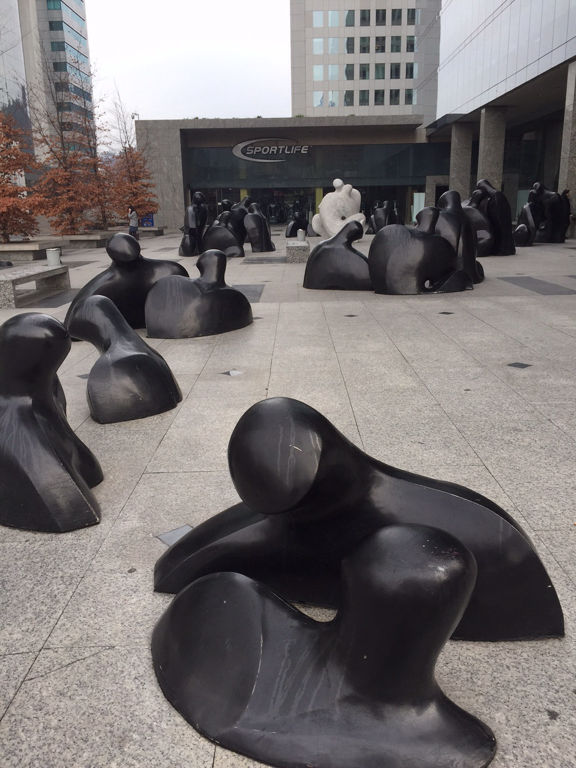 Two of the many pieces of vibrant and unique public art in Santiago. 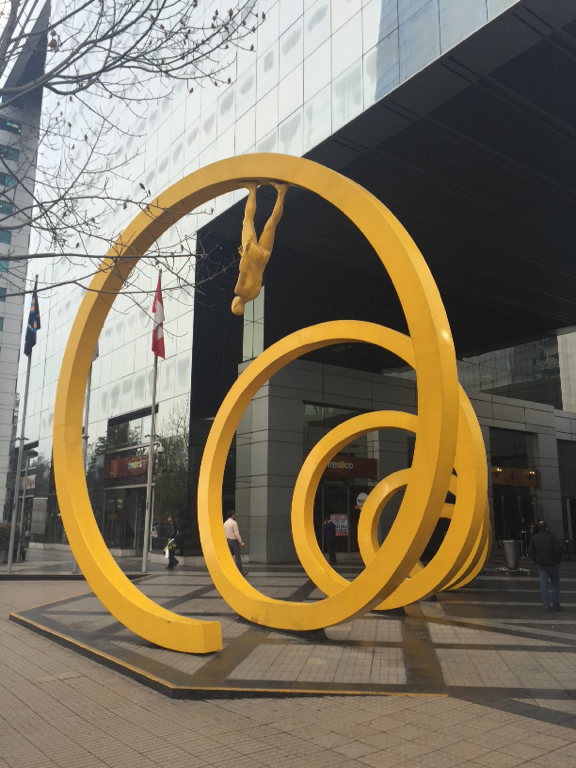