Let me begin by expressing my sincere condolences to all those who have lost loved ones during the earthquakes in Kyushu, Japan. It is a tragic event and my thoughts and prayers are with those affected.

We began the day with a pre-mission briefing with Canada’s Ambassador to Japan, Mackenzie Clugston. The Ambassador has served in this role for 3 years, but has over 20 years of history in Japan, having been posted here earlier in his diplomatic career. As such, his insights into the Japanese market, knowledge of local customs, and understanding of the Japanese businesses we will meet throughout this mission, are invaluable.

Canada has had a presence in Japan since 1929, one of our longest diplomatic relationships. Mississauga enjoys a strong working relationship with both the Canadian Embassy in Tokyo, as well as with the Ontario Commercial Secretariat that operates out of the same building. Our Economic Development Office works closely with both of these offices to identify Japanese companies looking to expand, and opportunities for Mississauga to gain more exposure in this market. 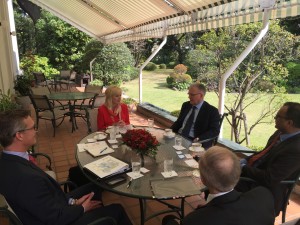 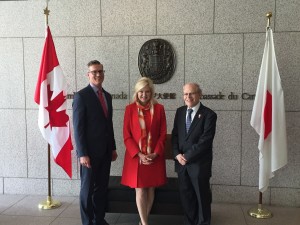 Following our meetings at the Canadian Embassy, we travelled to meet with Nippon Express, a global logistics company with a presence in Mississauga since 1983. The company boasts 387 locations in 37 countries globally and having reached a limit in the Japanese market, are looking to expand internationally. Their primary business in Ontario is the movement of air cargo, logistics and trucking, and ocean-bound cargo. As Toronto Pearson continues to expand, and as the population of the Greater Toronto Area continues to grow, there is a strong probability that Nippon Express will expand its Canadian footprint.

Interestingly, one of the General Managers we met with was located in the Mississauga office of Nippon Express. He reflected positively on his time in Mississauga, and talked at length about our high quality of life, our safe neighbourhoods, and our great diversity, which makes people from around the globe feel at home. Our Economic Development Office has been in regular contact with the Mississauga office and will assist the company with their growth plans. 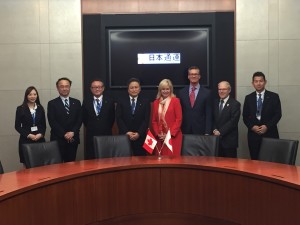 Next up we paid a visit to Obayashi Corporation to meet with their senior management team. Obayashi is one of the largest engineering and construction firms in the world, undertaking renowned projects like the Hoover Dam by-pass, the Tokyo Sky Tree, the tallest free standing tower in the world, and closer to home, the Eglinton Crosstown project. In 2010, Obayashi purchased the Canadian engineering company, Kenaidan, which has offices in Vancouver and Mississauga.

Obayashi has plans to expand its global engineering and construction work in Canada, building off successful projects like the Eglinton Crosstown. Kenaidan will be a critical part of this expansion and the future of Obayashi, meaning Mississauga has an excellent opportunity to be home to this future growth. Again, our Economic Development team is in regular contact with Kenaidan and will continue to work with them as they grow under the Obayashi umbrella.

As with many of the firms we have met with, Obayashi finds Canada, and in particular Mississauga attractive because of our talented and highly educated workforce. This is why Mississauga has undertaken the “Win the Human Race” campaign to showcase our human talent as a selling feature for international business. 66% of our population have post-secondary education, and 1/5 of our workforce have engineering degrees. This puts us a competitive advantage in comparison to other jurisdictions in North America and around the world. To succeed in advanced construction, you need the right talent. 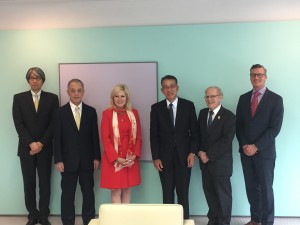 With the senior management team of Obayashi

The day ended with a reception hosted at Ambassador Clugston’s residence with over 60 people from a number of Japan’s top companies. Prior to this meeting, we met with UNI QLO, the world’s 4th largest clothing retailer. They are planning to open stores in Toronto in September, but expressed a strong interest in opening in Mississauga in the future. They have a Mississauga connection, with their Canadian warehousing and distribution centres located in our city. 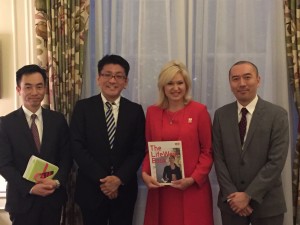 With the senior leadership team of UNI QLO Canada

It is quickly becoming apparent that Mississauga’s relationship with Japan has been an important part of our success as a city and will continue to play a defining role in our future. We have put in a great deal of effort to build awareness of Mississauga with Japanese companies, and the positive reception we have received at our meetings so far, as well as during tonight’s event, demonstrates that these efforts are paying off.

Tomorrow we continue our meetings in Tokyo before heading to Osaka on Wednesday. 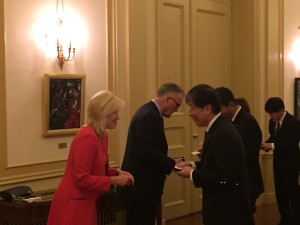 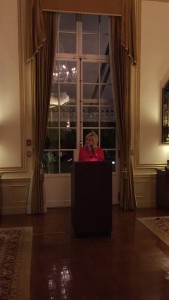