We began our day by travelling from Tokyo to Osaka via the Shinkansen Super Express, also known as the “bullet train.” Moving at over 250km/hr, we arrived in Osaka in just over 2 hours, a distance roughly equivalent to Toronto to Ottawa. I have been thoroughly impressed by both the expansiveness and punctuality of the Japanese train system. While the GTA does not yet have the population density to warrant as extensive a subway and high speed rail system as Japan, it is a model to learn from, and in many cases, emulate. 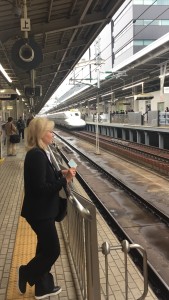 Waiting for the Bullet Train

Following our arrival in Osaka, we paid a visit to Sumitomo Precision Products (SPP), a company that manufactures precision-engineered products for a wide variety of industries, including oil and gas, automotive, and aerospace, among many others. In Mississauga, SPP manufactures landing gear assembly for many aircraft manufacturers, including Airbus and Boeing, among others. This requires highly skilled labour and an unrivaled attention to detail. This was a significant factor in SPP choosing Mississauga.  Our highly skilled labour force met this criteria, and our access to experienced workers in the aerospace industry is seen as a great asset. We were proud to welcome SPP to Canada in 2012 and have worked closely with them to acclimate to the Canadian environment and build connections with other aerospace companies. Of note, the former President of the aerospace division, Mr. Kaminaga made a point of attending today’s meeting, as he had a close personal connection with former Mayor McCallion. I was honoured that he would take the time to meet with us, as he was the architect behind SPP making its initial investment in Mississauga; an investment both he and I are very proud of. SPP is pleased with their Canadian operations and it is our hope that as the aerospace cluster continues to grow in Mississauga, SPP will continue to invest and grow within our city. 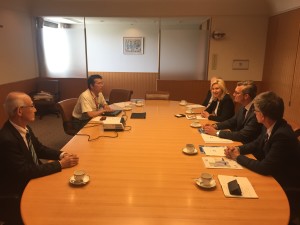 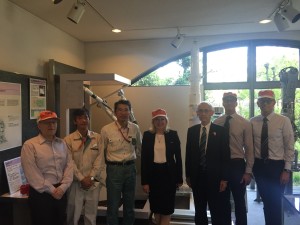 To put it in perspective, Mississauga is home to a burgeoning aerospace cluster, employing over 24,000 individuals at 220 companies. In fact, aerospace is one of our target sectors and our Economic Development strategy involves growing this cluster and attracting more companies, including Japanese companies, to invest in Mississauga. Our close proximity to Pearson International Airport and our long history in aerospace and aviation manufacturing (Avro Arrow, McDonell Douglas, Magellan, etc.,), combined with our highly-skilled work force and proximity to the North American market makes Mississauga an attractive place for many aerospace companies to invest. Global growth projections for the aerospace industry are strong, meaning Mississauga is well positioned to reap the benefits of increased investment in this sector for many years to come.

It is important to note that our delegation is accompanied by representatives from both the federal and provincial Embassy of Canada and Consul staff, including Trade Commissioner Services. From the federal government, the Trade Commissioner and Consul stationed in Nagoya, Mr. Matt Fraser is attending our meetings, and from the province, our international representative, Mr. Robert Ulmer is joining us. Both have extensive experience in the Japanese market and provide us with a well-respected presence in this country. At each meeting all three levels of government are present, which is a significant sign of respect and underscores to each company we meet with just how important they and all Japanese companies are to Mississauga, Ontario, and Canada. It also demonstrates just how serious we are about our relationship with Japan and in particular, the positive reputation Mississauga has in this market.

Following our meeting and tour of SPP, I was delighted to be hosted by the Kansai-Canada Business Association (KCBA) at a reception sponsored by Kinder Kids. The Kansai region of Japan is home to many innovative and industry-leading companies, mainly in the aerospace and life sciences clusters. Like Mississauga, the Kansai region, and Osaka in particular are actively seeking to grow their business clusters and become a hub of innovation. In fact, I was joined for a panel discussion at the reception by the Mayor of Osaka, Mr. Hirofumi Yoshimura who discussed in great detail the need for cities to be a the forefront of growth and innovation. I could not agree with him more and have on many occasions made a similar argument: cities are the engine of our economic success. Osaka and Mississauga share many similarities and I was honoured to join the KCBA to strengthen our partnership. 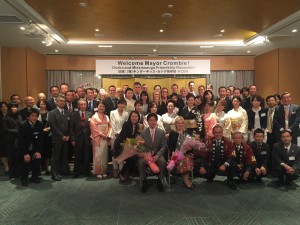 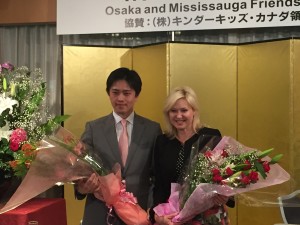 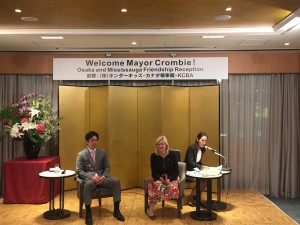 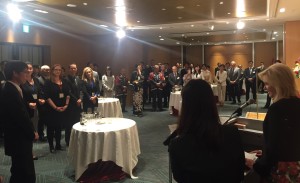 Speaking to the KCBA reception in Osaka

Kinder Kids is a company that understands this well. They are a world-renowned childcare company that opened in Mississauga in 2014. They provide young children with a unique learning environment that prepares them well for their future education. I had an opportunity at the reception to speak at length with Wayne Kim, the CEO and founder of Kinder Kids and Stephanie Winter, the Canadian manager, about their future plans in Mississauga. Their first location in Mississauga has been and unqualified success and it is our hope that they will soon be looking for a second location in our city.

Unfortunately, we were only able to stay in Osaka for a day, but I believe our time there was not only well spent, but will result in many returns, both economic and cultural, in the future. The feedback I received from many people at the reception was just how important it is that the Mayor of Mississauga visit Osaka and speak to local businesses in person. The face to face contact with these businesses cannot be underestimated and is critical to our securing future investment.

Tomorrow we leave for Nagoya where will take meetings with a number of companies, as well as attend another reception with local businesses at Canada House, the Trade Commissioner’s residence in Nagoya.