Economic development is all about building strong relationships with clients – in our case, businesses – and potential clients. To stand out in an increasingly competitive global environment, it is important that cities like Mississauga build strong relationships with our local businesses and those that could potentially expand their operations to locate in our city. Our Economic Development Office excels at this, and it is because of their work and that of former Mayor McCallion that Mississauga can boast over 101 of the approximately 300 Japanese companies in Canada and 220 Japanese companies in Ontario.

As we wrap up our time in Tokyo, our meetings today featured companies at different stages in their growth. From our perspective, regardless if a company has been in our city for 50 years or is just starting out, each is incredibly important to the future success of Mississauga and deserves our attention and assistance.

We began the day by meeting with Panasonic at their Japanese Centre in Tokyo. Panasonic is a household name in North America, and around the world. They expanded their operations to Canada in 1963 and were among the first of Mississauga’s many Japanese companies to locate in our city. They currently employ nearly 400 people in Mississauga and over 243,000 people globally.  Panasonic is one of the most innovative companies in the world, focusing in 5 main areas: housing and smart cities, automotive, consumer products, devices, and business to business (B2B) applications. I was pleased to join them today for a tour of their Smart City and Smart Home initiatives. Their objective as a company is to develop products and solutions that make the world a better place. Having toured their showcase centre, I can confidently say the future of technology is simply astounding. Panasonic’s work will change the world and how we live our lives for the better. 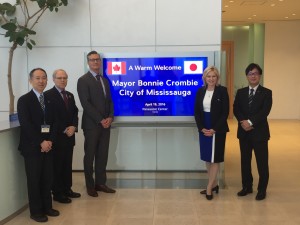 Prior to visiting Japan, I had the pleasure of visiting Panasonic in Mississauga, meeting with the Canadian leadership team, including the Canadian CEO, Michael Moskowitz, and taking a tour of their showroom to see first-hand the many innovative products Panasonic manufactures. At this meeting, the company shared their pride in being in Mississauga and reflected on the benefits of the relationship between Panasonic and the City of Mississauga. In 2018, the company will celebrate 100 years of operation and 55 years of operation in Canada. We will continue to work with Panasonic’s Canadian leadership team to help them identify opportunities to grow their business in Mississauga.

Following our meeting with Panasonic, we visited IKO Nippon Thompson. IKO stands for Innovation, Know-How, Originality. Founded in 1950, IKO manufacturers some of the most innovative bearings in the world, with a standard of production excellence that is second to none in the industry. Their products are featured in the robotics industry, advanced healthcare products (MRI machines, etc.,) the automotive sector, and in world-famous technology like the CanadaArm. 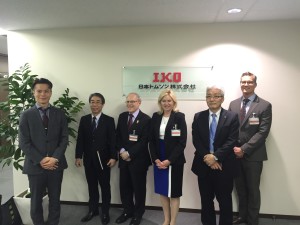 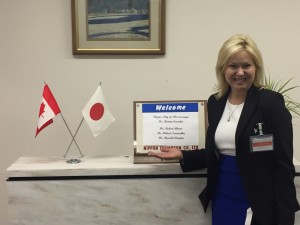 With the senior leadership team of IKO Nippon Thompson

IKO has been distributing their product in Canada for over 40 years through a local distributor in Mississauga, and have recently decided to open their first Canadian office in Mississauga’s Airport Corporate Centre. As IKO expands in Canada, we will work to connect them to the local business community in Mississauga and identify opportunities to network with local suppliers and potential sales opportunities. 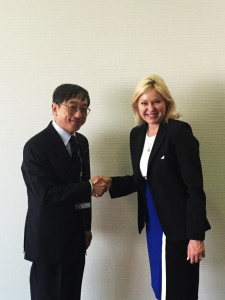 Our final meeting of the day was with Mitsubishi Heavy Industries (MHI) and their Vice President and General Manager of Aerospace and Airplane Division, Mr. Tetsuro Hisano. Like Panasonic, Mitsubishi is a household name, with operations around the world in many sectors. Their heavy industry division builds everything from trains to planes, oil, gas and natural resource extraction equipment, ocean liners, and so much more. They are truly world-leaders and Mississauga is proud to be the Canadian home of MHI since 2007. In Mississauga, MHI employs about 700 individuals in the production of aircraft structures (wing assembly, etc) at their Mississauga location.

I have had the pleasure of touring MHI Canada on multiple occasions and our Economic Development Office has worked with the company for more than a decade to ensure they are provided with all the assistance they need to grow and thrive. I look forward to working with Mr. Hisano and Mike McCarthy and his Canadian leadership team at MHI for many years to come. They are one of the jewels in Mississauga’s crown and a magnet for further aerospace investment in Mississauga.

So far the meetings in Japan have been highly productive and it is readily apparent that there is a great deal of interest in Mississauga. In fact, a question that I have been asked many times is, “what are the advantages Mississauga offers businesses?” I answer that by listing 10 attributes of our city, including:

There are many more attributes I could list, but these 10 factors make Mississauga a highly competitive destination. In particular, when speaking to Japanese companies, they are enthralled by the fact that we are home to 101 Japanese businesses, the most of any city in Canada by a wide margin. This cluster of Japanese businesses provides Japanese companies with a great deal of comfort when they look to expand to Mississauga.

Mississauga has had a presence in the Japanese market for many years, thanks to the foresight and leadership of Hazel McCallion and the diligence of our Economic Development Office. This presence has paid off many times over and it is my hope that through missions like this one, that we will continue to attract investment from Japanese firms into Mississauga.

Tomorrow we depart for Osaka for more meetings with local business.