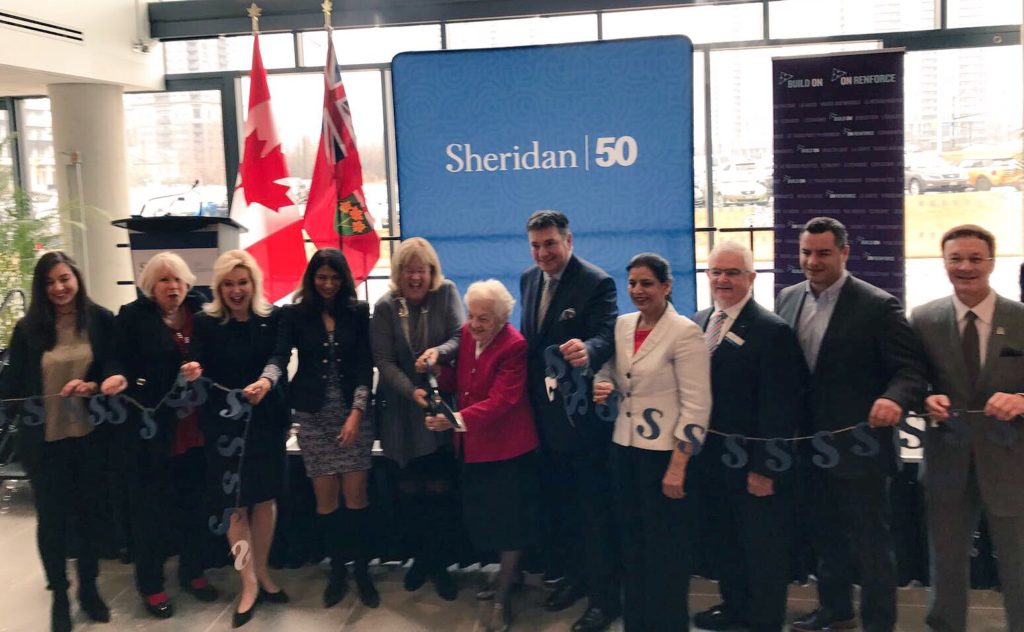 “On behalf of the City of Mississauga and Members of Council, I want to congratulate everyone who came together and worked together to achieve what is truly a game changer for both Sheridan College and Mississauga.

“I want to single out the team of professionals from the City of Mississauga who worked closely with their Sheridan counterparts throughout the planning and construction phase of this transformational project.

“While education is the purview of the provincial government, all three levels of government, and especially cities, have a role to play in supporting our post-secondary institutions.

“In Mississauga there is a conscious effort to look at Council business through the lens of: how can we advance the priorities of our local post-secondary institutions?

“The Hazel McCallion Campus is situated on nearly nine acres of prime land made possible through a partnership between Mississauga and Sheridan.

“In 2011, it was Mayor McCallion who cut the ribbon to open Sheridan’s 155,000-square-foot Hazel McCallion Campus.

“The original campus began accommodating 2,300 students, mainly budding minds undertaking studies in marketing, entrepreneurship, and accounting with plans to go off into the competitive world of business.

“But no sooner did the campus start admitting students; the demand for enrollment spaces far exceeded its capacity.

“This new expansion is a 220,000 square-foot facility and it will welcome an additional 3,200 full-time students for a total enrollment of approximately 5,500 here in Mississauga. For local businesses, this means access to more customers on a daily basis.

“What’s more, these students will be walking distance from our Central Library, its vast collection of research material, and the Mississauga Business Enterprise Centre which helps turn ideas and concepts into concrete business plans.

“This year, Sheridan marks its 50th anniversary. In that time both Mississauga and Sheridan have grown side-by-side, cementing their reputations as world-class destinations where people – of all backgrounds – can succeed.

“I cannot think of a more appropriate way to celebrate this golden anniversary than with the Official Opening of the Hazel McCallion Campus B-Wing.

“As I have already mentioned, this is a very important day for Mississauga.

“Sheridan College is at the heart of our plans for a complete city: a place where people can earn an education; find a well-paying job; start a business; enjoy a thriving, livable, walkable downtown core; and have an unrivalled quality of life right here in Mississauga.

“A complete city is also a place where students and all people can access a vast, well-connected and reliable public-transit network.

“Sheridan College is located directly on our proposed Hurontario Light Rail Transit (LRT) line. Students will be walking distance to and from LRT stations.

“This is in addition to having full access right now to: MiWay Bus Service, Brampton Züm and the Square One GO Bus Terminal – the second busiest GO bus terminal and an important stop along the Mississauga Transitway.

“I cannot wait to see all the innovative ideas that students and faculty will develop, studying and working side-by-side here at Sheridan College’s Hazel McCallion Campus B-Wing.

“Congratulations, once again, on this important and celebrated occasion; the future is promising for both Sheridan and Mississauga.”