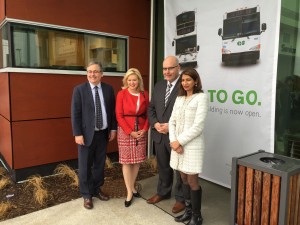 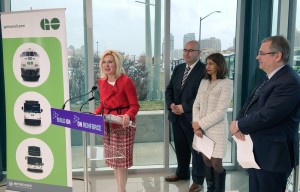 Mississauga – These important upgrades to the Square One Bus Terminal will improve commuter travel for workers, students, visitors and residents who rely on the second busiest terminal in the GO Bus network, Mayor Bonnie Crombie said.

Mayor Crombie made the comments following today’s announcement by Ontario Transportation Minister Steven Del Duca that Metrolinx has completed improvements to the Square One Bus Terminal that will make it easier for customers to take GO Transit.

Associate Minister Dipika Damerla, MPP for Mississauga East – Cooksville and Bruce McCuaig, President and CEO, Metrolinx, were also in attendance for the announcement.

Mayor Crombie added “I applaud Minister Del Duca, the Wynne government and Metrolinx for their commitment to ensure Ontario’s third largest city, Mississauga, receives important infrastructure investments and is at the heart of a plan to build an extensive regionally-integrated transit network that gets people moving and grows our economy.”

“In Mississauga, we cannot speak about regionally-integrated transit without discussing the Hurontario LRT,” Mayor Crombie said. “A year ago, Minister Del Duca came to Mississauga and announced that the Hurontario LRT would receive full funding amounting to $1.6 billion dollars.

“It is the single largest infrastructure investment in Mississauga’s history.”

Over the next two decades, Peel Region will need to accommodate approximately 150,000 jobs and over 300,000 people. Nearly a quarter of that growth is expected to live and work in the area immediately surrounding the Hurontario-Main corridor.

“We are planning new and important intensified developments, consistent with the requirements in the Places to Grow Act. But these plans would not be possible without full funding for the LRT.”

“The LRT will connect GO Train Stations from Port Credit to Cooksville. It will run through City Centre and unleash the potential of our downtown core, allowing us to more aggressively get on with our Downtown 21 plan. The LRT will be linked to our MiWay Bus Rapid Transit System, and the GO Bus network. Many of the connections will take place at this station.”

Mayor Crombie concluded “Mississauga has a partner with the Wynne government. Working together, we are building a stronger and prosperous future for Ontario’s third largest city and the entire GTHA Region.”