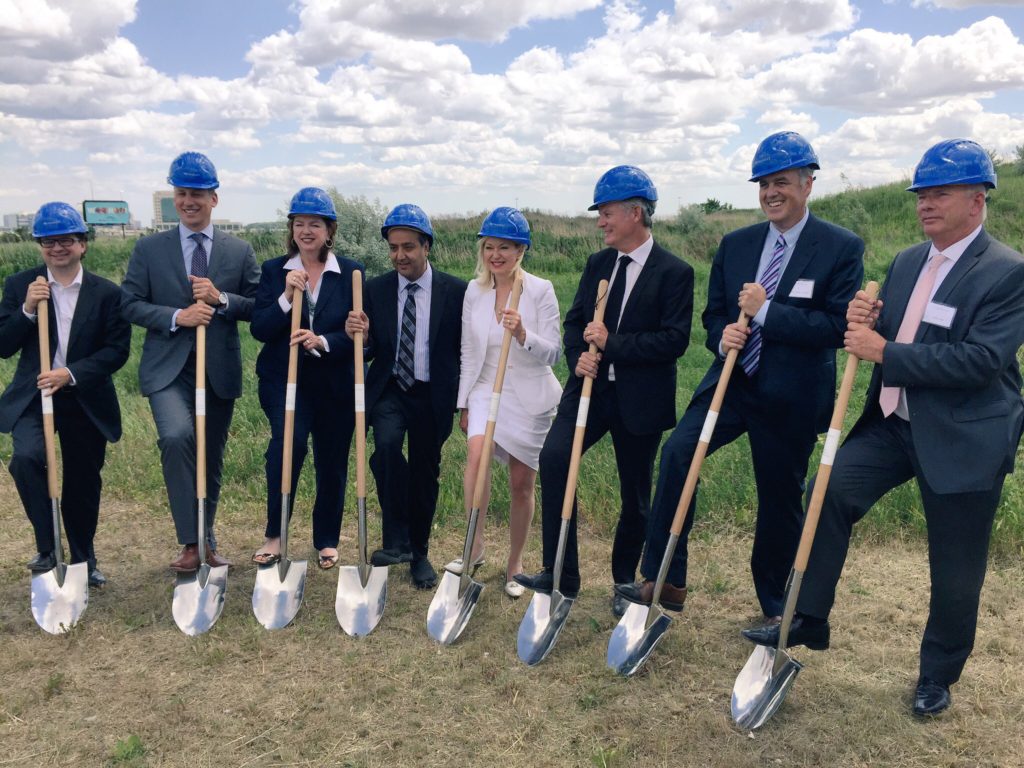 The Mississauga Gateway Centre will be home to lead tenant, RSA Insurance, which will employ 1,000 people at the 221,000 square-foot gold LEED facility. The development is being led by the Healthcare of Ontario Pension Plan (HOOPP), Triovest and Avison Young.

Also in attendance was Ward 5 City Councillor Carolyn Parrish and City of Mississauga Planning and Building staff who have collaborated in the development of this latest commercial development.

Mayor Crombie used the occasion to highlight the strength of Mississauga’s local economy, noting that in 2015 Mississauga issued building permits for $1.3 billion in construction. “This represents a 10% increase over last year, while commercial and industrial activity accounted for more than $608 million.”

Mayor Crombie said the new building will be situated along the proposed Hurontario LRT route, the largest infrastructure investment in Mississauga history, which is being fully funded by the Wynne government.

“Over the next two decades, Peel Region will need to accommodate approximately 150,000 jobs and over 300,000 people,” Mayor Crombie said. “Nearly a quarter of that growth is expected to live and work in the area immediately surrounding the Hurontario-Main corridor.

“We are planning new and important intensified developments, consistent with the planning and growth requirements for Mississauga, in the Province’s Places to Grow Act.”

“This new Mississauga Gateway Centre building represents the growing demand that exists for new and important developments along our important Hurontario route – which will serve as the north-south spine of our regionally-integrated transit efforts.”

The Hurontario LRT will be linked to both the Port Credit and Cooksville GO Train stations, along with the Square One GO Bus Terminal – the second busiest terminal in the GO Bus transit network.

“The proposed new GO Train stations support Mayor Tory’s SmartTrack plan,” Mayor Crombie said, adding that “it is another important example of all governments working together to break gridlock, build transit, and help better move commuters throughout communities in the Western GTA and across the entire region.”