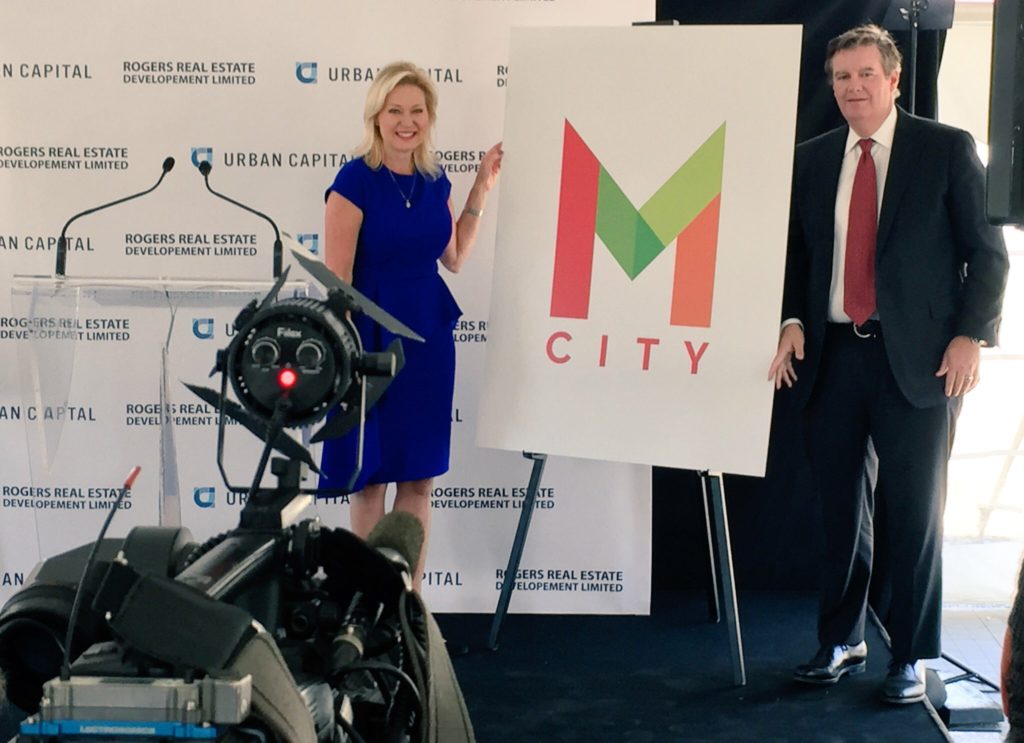 Mayor Crombie and Edward Rogers unveil the new M City logo for the planned to new development in Downtown Mississauga.

Rogers Real Estate Development Ltd announced a $1.5 billion planned development in Downtown Mississauga. The development is M City – a 10-tower, 15-acre, 4.3 million sq. ft. community. It is to include over two-acres of public parkland and has been inspired by the City of Mississauga’s own Downtown21 Master Plan. The following are remarks by Mayor Bonnie Crombie made during today’s announcement:

“Good morning, everyone. On behalf of the City of Mississauga, Members of Council and our team of professional staff let me welcome Edward Rogers to Canada’s sixth largest city for what is truly an historic announcement.

“Congratulations to my friend Councillor Nando Iannicca, who for nearly three decades has been a tireless champion committed to ensuring Mississauga’s downtown reaches its full potential.

“The name Rogers is synonymous with innovation, entrepreneurship and achievement. And with today’s investment in Mississauga’s thriving, growing and promising downtown core, the Rogers name and family will be remembered and celebrated for their commitment to urban planning and city-building.

“The planning for this transformational investment goes back to 2007. Let me acknowledge Ed Sajecki, Commissioner of Planning and Building, and the planning department who ensured today would be possible.

“In Mississauga we are building a complete city – a place where people can live, work, earn an education and enjoy an unrivalled quality of life – all within their community.

“This landmark development will redefine the western edge of downtown Mississauga and add to our growing skyline.

“This new community will be plugged into our growing regionally-integrated transit network that will include the new 20 kilometer, 20 stops Hurontario Light Rail Transit and our extensive MiWay bus transit network.

“Amazingly, we have secured a new investment that actually exceeds the Hurontario LRT!

“Today’s unprecedented announcement is further proof that Mississauga’s next forty years will not look like the last forty.

“With the confidence, commitment and vision of people like Edward Rogers, we are actually building a livable, walkable city; fully connected by public transit and accessible to quality public services; home to mixed-use residential and commercial developments; healthy, clean and both green and creative spaces; and neighbourhoods that safeguard and respect local history and embody Mississauga’s forward-looking values as an inviting, inclusive and engaging place people choose to be in.

Our urban renaissance is building a bridge from our past, as an edge city and into the future, as a leading edge city.

“And I would like to proclaim Edward Rogers an honorary Renaissance Man of Mississauga!

“Effective urban planning is our responsibility and our legacy to future generations.

“The decisions we make today will affect our future in a profound way.

“From Lakeview, to downtown Mississauga, and in all neighbourhoods in between, Council is working with staff, businesses and community partners to strategically and thoughtfully plan for a more promising future.

“I would now like to invite Edward Rogers to join me to unveil the name of this new development.”