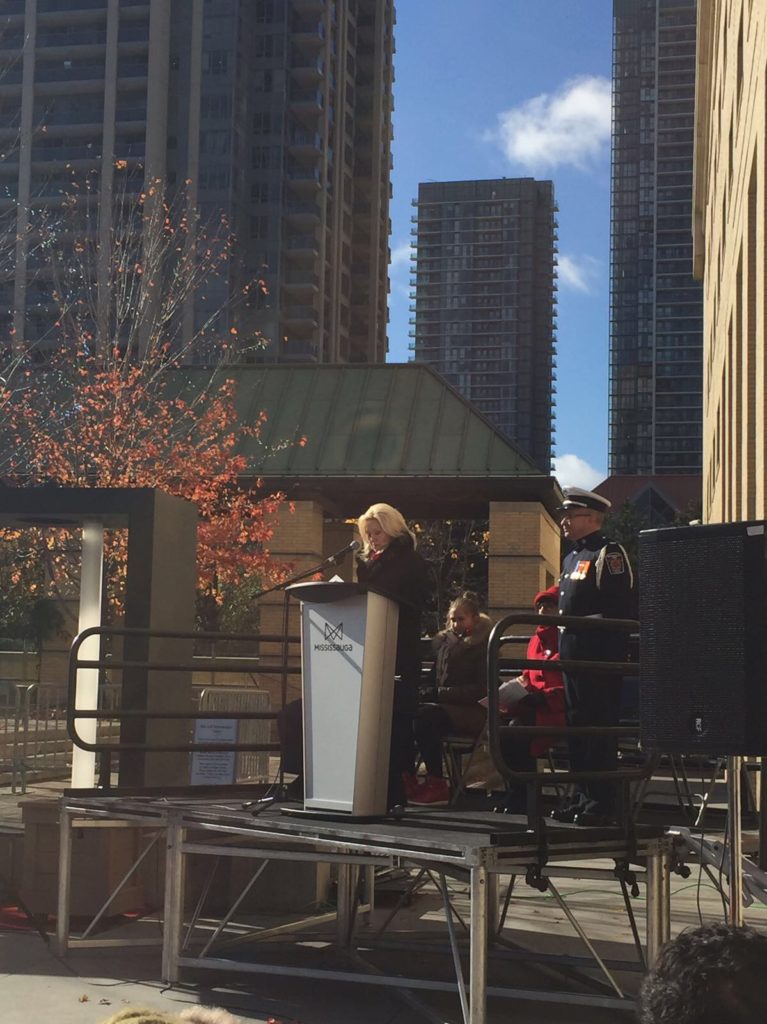 The following remarks were delivered by Mayor Bonnie Crombie during the 2017 Remembrance Day Service held at the Mississauga Civic Centre:

“This particular Remembrance Day Service is an opportunity for City of Mississauga Council and staff to come together to remember our fallen brothers and sisters; men and women of past generations and present times; those who sacrificed their lives so that we could have a future rooted in the mission of building safe, tolerant and thriving places to call home.

“Remembrance Day falls on the 11th hour, of the 11th day, of the 11th month, because it was at this time that the bloodshed of the First World War came to an end.

“Because of the important work undertaken by Heritage Mississauga we know of 96 fallen soldiers from the First World War who were from Historic Mississauga, and are honoured on memorials, honour rolls or cenotaphs in Mississauga.

“Our very own Lorne Scots – Peel, Dufferin and Halton Regiment members – have served in nearly every theatre of war in which Canada has fought including the bloody Battle of Dieppe from World War II and continue to safeguard local comm

unities at home, and around the world.

“The Regiment’s origin is traced to the 20th Halton and 36th Peel Battalions of Infantry, both raised in September 1866 – a year shy of Confederation and the birth of our free, peaceful nation.

“The Lorne Scots will forever hold an important place in Mississauga.

“The First World War was not the first, nor the last time, that our brave men and women in uniform sacrificed their limbs and lives so that we could be a free city, province and nation.

“On this day we mark the 100th anniversary of the end of the Battle of Passchendaele – an unthinkable and horrific battle where 16,000 Canadians were killed or wounded.

“This past April, we also marked the Battle of Vimy Ridge.

“On the morning of April 9th, 1917, this grave and unforgettable battle began.

“A united front of Canadian regiments were on the ground in France, fighting in trenches, battling for freedom and peace, committed to nothing short of victory.

“This historic and bloody mission resulted in over 10,000 casualties and over 3,500 fatalities for our country.

“This battle marked an important turning point in our young nation’s history and through such unthinkable destruction, devastation and death, Canada emerged a more united and proud country.

“Although we come together once a year to hold Remembrance Day services, I would like to single out Mississauga’s three Royal Canadian Legion Branches:  Cooksville Branch 582; Port Credit Branch 82; and Streetsville Branch 139.

“I also want to recognize the Army Navy and Air Force Veterans Unit #262 in Lakeview.

“These local groups hold Remembrance Day services in neighbourhoods throughout our City, and the work they undertake year-round is commendable.

“The membership is part of a bigger mission to safeguard and promote this country’s history.

“They help ensure that current and future generations can truly understand and appreciate what life was like for those generations who came before us and made the ultimate sacrifice.

“This mission is shared by our cadet programs that run throughout Mississauga and who train the next generation of outstanding, brave and dedicated citizens.

“I think of the squadron 789 Lieutenant Robert Hampton Gray – named for the Robert Gray, a recipient of the Victoria Cross.

“The Victoria Cross is the highest military honour of the British Empire.

“Nearly 100 Canadians have bravely earned it.

“In 2017, Mississauga joins communities across Canada to mark the 150th anniversary of Confederation and our nation’s founding.

“This much anticipated and celebrated milestone would not have been possible if not for the sacrifices of those fighting at Vimy Ridge, and at other deadly battles and wars, which have been so fundamental in Canada’s history and identity.

“Throughout Mississauga you will find cenotaphs in Port Credit, Lakeview, Cooksville, Streetsville and here at City Hall.

“I always make it a priority to showcase this cenotaph when hosting visiting dignitaries to City Hall – including our recent visit from US Consul General Juan Alsace.

“These local monuments stand as a testament to our enduring pride and respect for fallen soldiers, veterans and those in active duty.

“The City of Mississauga renamed Cenotaph Park in Port Credit to Vimy Park to mark the 100th anniversary of the Battle of Vimy Ridge.

“The park’s current name reflects the Port Credit Cenotaph located there and the new name will continue to honour those soldiers who fell during battle.

“It is incumbent upon all of us to make sure we make the time to visit these memorials to reflect on the past and show appreciation for all that has been safeguarded for us.

“Today, soldiers from the various service branches of the Canadian Armed Forces continue to make us proud, and bravely undertake important peacekeeping missions around the world.

“I want to thank those residents who currently have a loved one in active service.  This cannot be easy. You live with ongoing uncertainty and growing concern for their safety. You just want your son or daughter, husband or wife, to come home safe and sound. Thank you for your own sacrifices and support, so that our soldiers can undertake their mission to keep Canada safe.

“In closing, on this day, let us keep in our thoughts and prayers all those fallen soldiers who fought so we could be a free and law abiding nation.