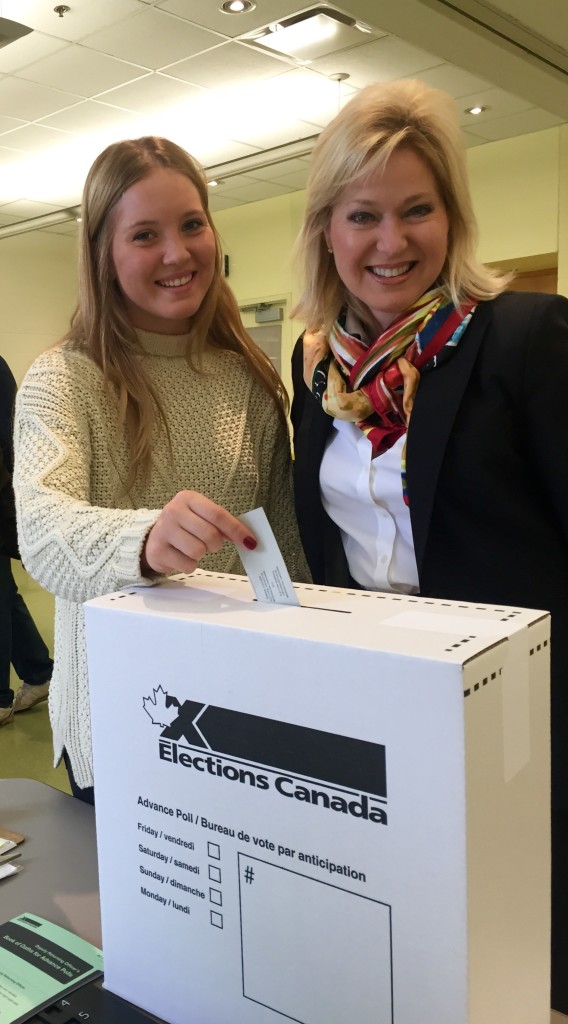 Mayor Bonnie Crombie and her daughter, Natasha, voting during the first day of the advance polls at the Huron Park Recreation Centre.

Mississauga – I encourage all residents to take part in the democratic process and to have their voices heard by voting in the 42nd federal election, Mayor Bonnie Crombie said today, after casting her ballot during the first day of advance voting.

Mayor Crombie was joined by her daughter Natasha, an undergraduate student at Western University, who is voting for the first time.

“The priorities of Mississauga are the priorities of the majority of Canadians”, said Crombie, who has used the federal election campaign as an opportunity to raise awareness and to press for dedicated and predictable funding for public transit and infrastructure; new efforts to ignite local economic development opportunities to attract job-creating investments; and increased support to build more affordable housing.

These three issues were also at the heart of a special Mississauga federal election television debate Mayor Crombie hosted in collaboration with the Federation of Canadian Municipalities (FCM) and Rogers TV Cable 10. Click here to watch the debate online.

Crombie added that “as a former Member of Parliament, I would like to acknowledge all candidates who have put their names forward to serve the people of Mississauga in Ottawa.

“Seeking public office requires immense personal and professional sacrifices but it is a tremendously rewarding opportunity.”

Crombie concluded that “I look forward to working with all elected officials who will put the best interests of Mississauga families first and foremost.”