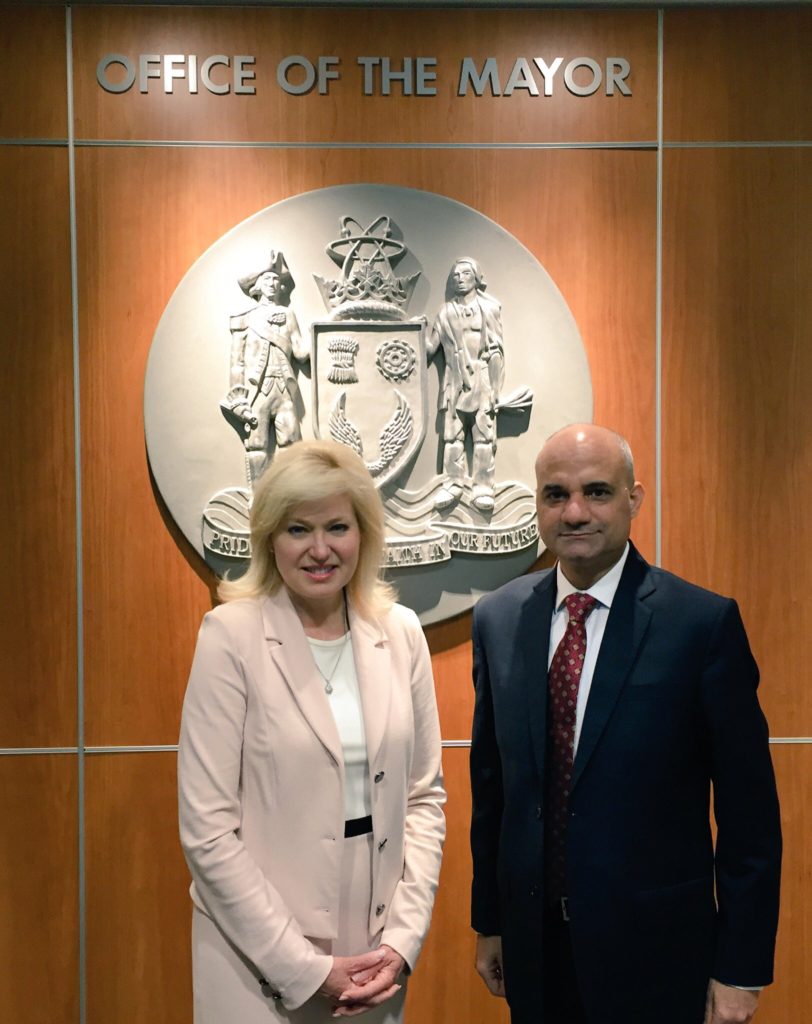 Consul General Bhatia was appointed to the Toronto-area diplomatic post in March 2016. Last year Mayor Crombie met with his predecessor Akhilesh Mishra, who has been appointed India’s High Commissioner to Maldives.

“Mississauga is home to an active, engaged and thoughtful Indian population,” Mayor Crombie said. “The Greater Toronto Area is home to more than 500,000 Indo-Canadians.”

During their meetings Mayor Crombie briefed Consul General Bhatia about her first visit to India this past year while taking part in a trade mission.

“The common thread woven throughout our working meetings with government and business leaders was our people-to-people ties and cultural linkages between Canadian communities like Mississauga with India.”

Ontario has exported $307 million in goods to India and imported $1.6 billion in products from there. Bilateral trade between India and Canada has reached $4.14 billion. India plans to invest over US $1 trillion in infrastructure development to accommodate its fast-growing urban centres.

Our thriving cultural synergies are matched by our economic ones as well, Mayor Crombie said, citing how Mississauga is home to 16 Indian-based businesses that make up Mississauga’s key industry sectors including: information and communications technology; financial services; life sciences; and automotive and aerospace.

Mayor Crombie closed her remarks by saying “Working together, we will further promote economic development opportunities, the exchange of knowledge and best practices and celebrate a far greater appreciation and understanding of Canada and India’s enriching cultural traditions and shared values.

“Once again, let me formally recognize and welcome Consul General Bhatia to Mississauga and congratulate you on your new appointment to the Toronto region.”