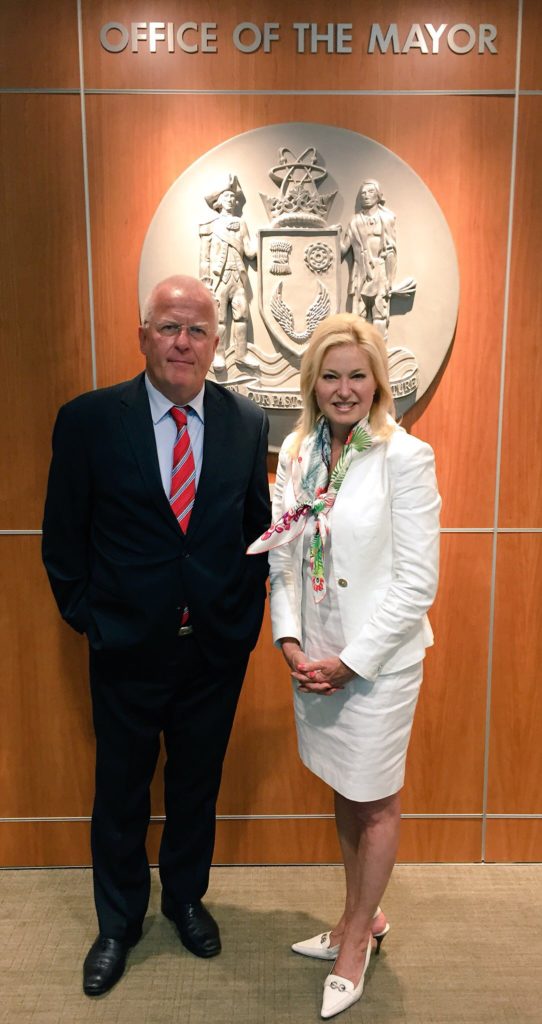 On behalf of the Members of Council, the Corporate Leadership Team and all professionals from the City of Mississauga, I would like to formally welcome German Consul General Peter Fahrenholtz to Canada’s sixth-largest city, on the occasion of his first official visit with us, Mayor Bonnie Crombie said today.

This marked the first official visit to Mississauga by German Consul General Fahrenholtz. Mayor Crombie has hosted meetings with a number of international delegations and diplomats, including consuls general from: Japan, India, China, Israel, Turkey, Sri Lanka, and Pakistan.

“Today is an opportunity to further strengthen relations between Mississauga and the German businesses and communities,” Mayor Crombie said, adding that “a total of 102 companies of German origin are located in Mississauga, representing the second largest market for foreign-direct investment in Mississauga.”

Many German-based companies operating in Mississauga are an important part of the City’s key industry sectors, which include: information and communications technology; financial services; life sciences and automotive and aerospace.

As part of the official visit, Mayor Crombie hosted a stakeholder roundtable discussion joined by Councillors John Kovac, Ron Starr, along with senior staff from the City of Mississauga. The Economic Development Office presented a comprehensive briefing about the strength and diversity of Mississauga’s local economy.

Mayor Crombie said “Mississauga is proudly home to an active, engaged and thoughtful German population of nearly 30,000 residents of German descent,” adding that our thriving cultural synergies are matched by our economic ones as well.”

Mayor Crombie used the stakeholder roundtable discussions Mayor Crombie to brief Consul General Fahrenholtz about Mississauga’s delegation during the recent 2017 BIO International Conference – one of the largest global events for the biotechnology industry. Global pharmaceutical company, Bayer, based in Leverkusen, German, operates a location in Mississauga.

“Working together, we will further promote economic development opportunities, the exchange of knowledge and best practices and celebrate a far greater appreciation and understanding of Canada and Germany’s enriching cultural traditions and shared values,” Mayor Crombie concluded.