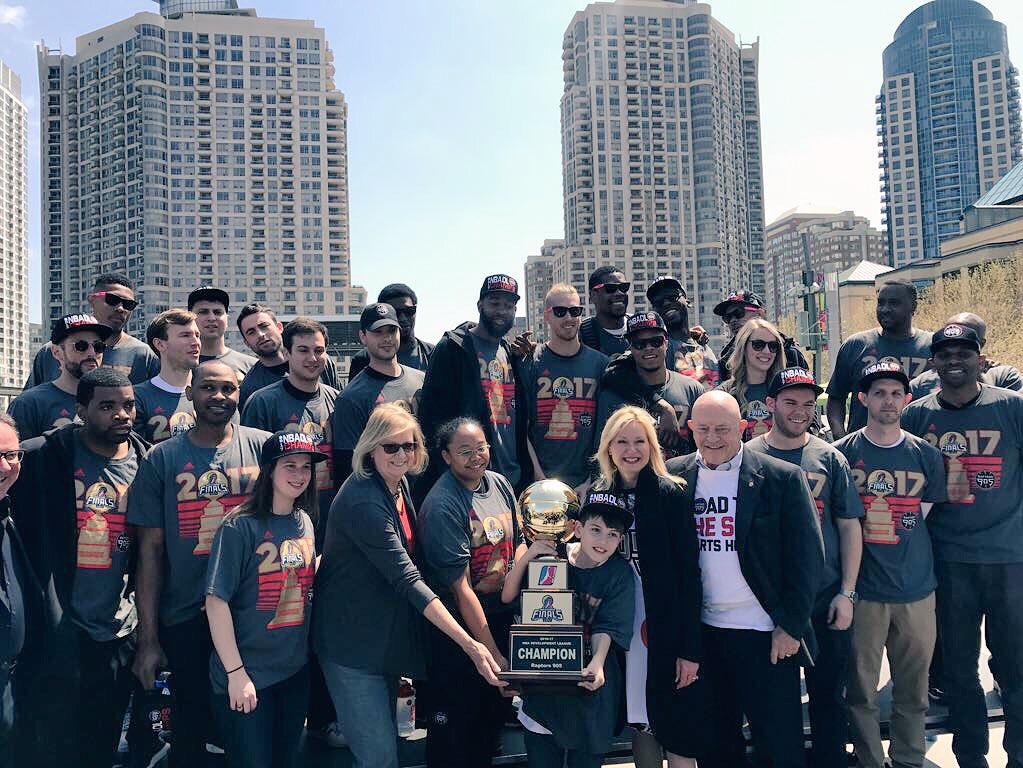 “Good afternoon, everyone. On behalf of the City of Mississauga, Members of Council, our team of professional staff and sports fans from across our city, let me formally congratulate the Raptors 905 on dominating the season and winning the D-League Championship!

“Last night was an exciting one for basketball fans across Canada. I’ve been answering my phone all morning, “City of Mississauga, Home of Champions.” Has a nice ring to it, doesn’t it?!

“It really wasn’t that long ago in June of 2015 that Council and staff gathered at the Hershey Centre with Maple Leafe Sports and Entertainment and the Toronto Raptors to announce that Mississauga was chosen for their new NBA D-League team – the only D-League franchise in Canada!

“Mississauga was thrilled to officially welcome Canada’s first NBA development League team – the Raptors 905 – to our city in 2015.

“Now in their second season, the organization and team have shown incredible development and growth leading up to this historic championship win.

“Without question this first ever win was a team effort.  But let me single out a few of the all-stars who truly demonstrated hard work, discipline and professionalism both on and off the court: Small Forward, Bruno Caboclo; Point Guard, Fred VanVleet and, Power Forward, Pascal Siakam – who was also named the most valuable player of the final game.

“Now I’m sure the players will agree with me that we need to also single out the leadership, mentorship and commitment shown by coach, Jerry Stackhouse – a championship winning coach in his first year as head coach!

“It came as no surprise to any of us that the NBA D-League named you the 2016-2017 Coach of the Year! You led the Raptors 905 to the Central Division Championship; the Eastern Conference Championship; and to the NBA Development League Championship!

“You pushed the team to “work their butts off” and it worked!

“In the last two years, the Raptors 905 team has quickly won over the support of basketball fans across the GTA and we have all enjoyed the journey leading up to this moment.

“Beyond the courts, we know the value and benefits sport can provide to children, youth, adults and seniors. Skills developed by participating in sports are carried throughout life – skills such as teamwork, leadership, decision making and communication.

“Coach Stackhouse and the entire Raptors 905 team are inspiring future generation of budding young athletes to work hard, practice and go for their dreams.

“As the Toronto Raptors advance in the NBA Championship maybe our very own champions can offer some pointers on how to make it to the finals and win!

“We are on the road to the six and what a ride it has been!

“Congratulations, once again! We all look forward to welcoming the team back to the Hershey Centre next season!”