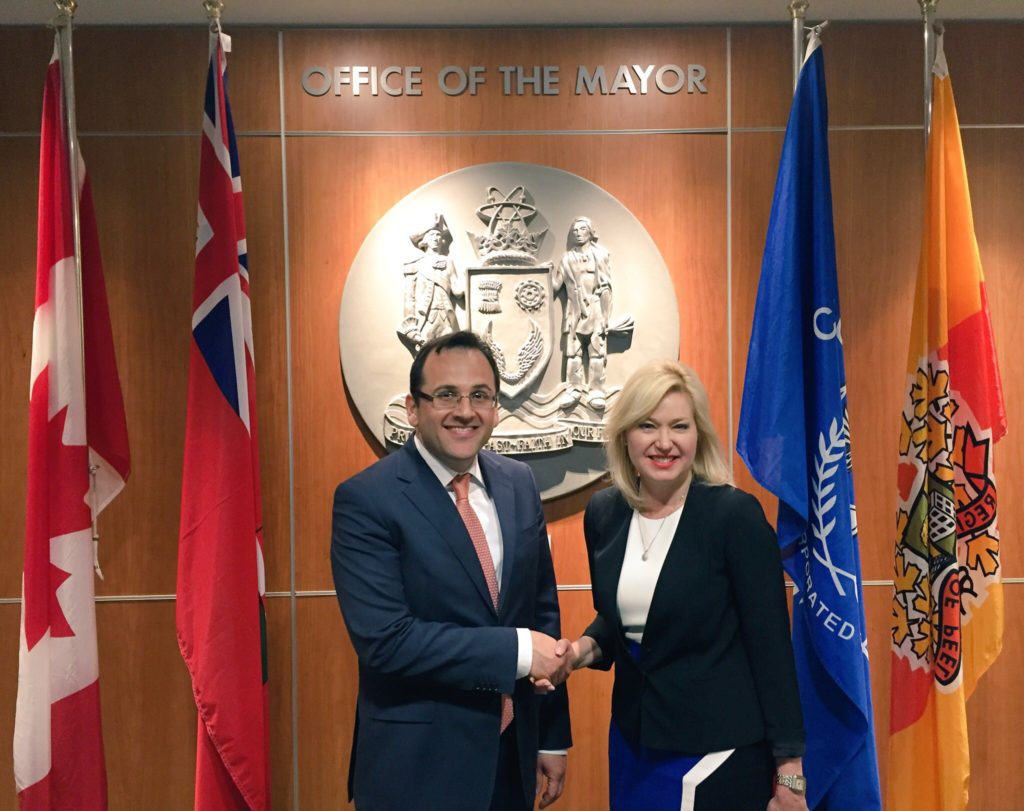 Mississauga – On behalf of the City of Mississauga and Members of Council and our Corporate Leadership Team, I would like to formally welcome to City Hall Turkish Consul General Erdeniz Şen, Mayor Bonnie Crombie said today.

Mayor Crombie made the comments during Consul General Şen’s first Civic Visit to City Hall. Consul General Şen was appointed to his current position in September of 2015 and is holding introductory meetings with government stakeholders from throughout the Greater Toronto and Hamilton Area.

“Today we commemorate the Consul General’s Civic Visit as an opportunity to strengthen relations between Mississauga and Turkish communities,” Mayor Crombie said. “Mississauga is home to an active, engaged and vibrant Turkish community. Nearly 2,500 Mississauga residents are of Turkish descent.”

During the Civic Visit, the Consul General met with members of the City of Mississauga’s Economic Development Office (EDO). Merchandise imports from Canada to Turkey are valued at over $1 billion.

Mayor Crombie said “Our rich cultural synergies help us connect economically.” The Turkish market offers Canadian companies great opportunities in a multitude of sectors including health industries and aerospace to name a few.

In June Mayor Crombie and professionals from EDO will attend the 2016 BIO International Convention. More than 15,000 delegates are expected to attend the life-sciences conference, the largest in the world.

Mayor Crombie added “we will meet and network with industry experts, investors, stakeholders and partners, with the goal to strengthen relationships and leverage Mississauga and Ontario’s competitive advantage in the life sciences sector.”

Mayor Crombie highlighted the Mississauga International Partnership Program Committee and the Diversity and Inclusion Advisory Committee as important bodies allowing “our people and businesses to connect culturally, foster a stronger sense of community, and a further understanding and appreciation for our shared values with people from around the world.”

Mayor Crombie noted that “Over the last year my office has met with the Indo-Canada Chamber of Commerce; the Mississauga Chinese Business Association; the Canada-Poland Chamber; along with Consuls General from India, China, Pakistan, Japan and Poland.”

Mayor Crombie concluded “We will continue to build strong, proud and enduring relations Mississauga and communities from around the world.”