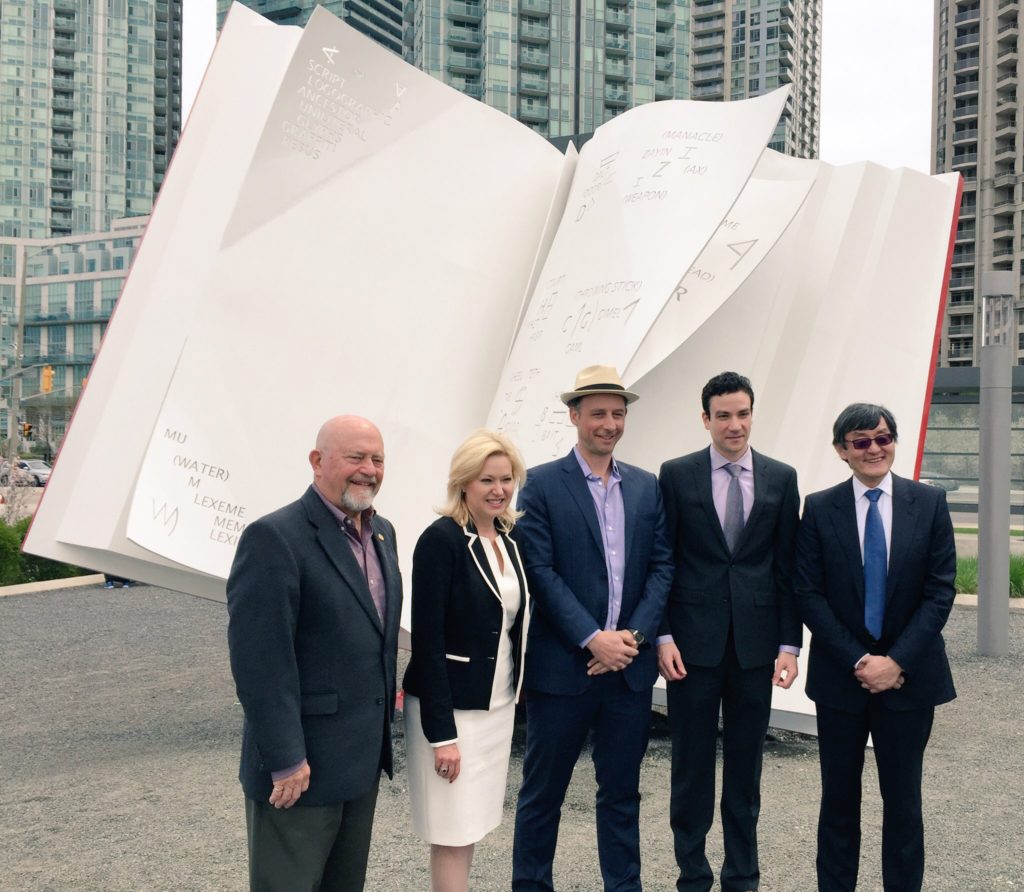 Mississauga – I would like to recognize our colleagues from Toronto Pearson International Airport (Greater Toronto Airports Authority) for generously donating The Book by Ilan Sandler to be part of the City of Mississauga Public Art Collection, Mayor Bonnie Crombie said today during a public art unveiling.

On hand for the unveiling was Howard Eng, President and CEO of the Greater Toronto Airport Authority (GTAA); Ward 4 Councillor John Kovac; and Paul Damaso, the City of Mississauga’s Director, Culture Division.

The Book – a painted steel sculpture – was donated to the City of Mississauga by Toronto Pearson. This public art piece depicts an open book with two pages torn from its spine appearing to blow in the wind, animating the space for community members to freely enjoy.  Originally commissioned by the GTAA and Hillside Media Communications, Ltd., the intention was always to donate The Book to a worthy organization after its display at Toronto Pearson.

“It is only fitting that The Book is a few steps away from Mississauga’s Central Library – a popular gathering place where residents of all ages truly have unlimited opportunities to enrich themselves. This is what public art helps to achieve – it enriches communities, residents and visitors.

Mayor Crombie went on to say that “When we work alongside our partners at Toronto Pearson it often has to do with one of our leading priorities including building regionally-integrated transit and undertaking new economic development initiatives.”

“With the donation of this new sculpture Howard Eng and the team from Toronto Pearson have once again demonstrated that they share our vision and commitment to city-building.”

Mayor Crombie said “as we look toward Mississauga’s promising future, so many of our hopes, dreams and aspirations are rooted in building a livable, walkable pedestrian-oriented downtown where The Book is now proudly on display.”

“Ours is a downtown where residents can live and work; where people can earn an education at Sheridan College; take in a celebrated performance at the Living Arts Centre; go for dinner at a popular restaurant; shop for premium brands; enjoy an exhibit at the Mississauga Art Gallery; attend countless community festivals and events hosted almost daily at Celebration Square.”

“And one day the 22 kilometre Hurontario LRT will connect neighbourhoods throughout Mississauga and the GTA and bring people more seamlessly here to our downtown core.”

Mayor Crombie concluded “I have always said Mississauga is a city that shines – we shine because Council takes action to support local artists, our creative sectors and works to elevate Mississauga’s reputation as a leading arts and cultural destination.”