Mayor Crombie made the following statement at City Council on June 20, 2018 during the discussion on her resolution on NAFTA

“For over 30 years Canada and the United States have enjoyed a free trade relationship that has resulted in economic prosperity for both our countries.

“Mississauga is a global city, home to over 90,000 businesses, including 73 Fortune 500 companies, 1,400 multi-national firms, and 87,000 small and medium-sized businesses, all who rely on free and fair trade with the U.S.

“While I agree that modernizing NAFTA is a good thing, it’s important that we don’t lose sight of the benefits that this agreement has for both our countries. Thousands of jobs in our city along with local businesses and manufacturers across the province rely on two-way trade with our largest trading partner south of the border. In 2016, two-way trade between Canada and the United States totalled $673 billion.

“While it’s unfortunate that the federal government has been forced to impose retaliatory tariffs on American products as a result of U.S. tariffs on steel and aluminum, we stand with the federal government’s decision to advocate for a fair free trade deal between Canada and the United States that benefits Canadian businesses, workers, and consumers.

“That’s why today, City Council passed a motion to formally support the position of the federal government. As Mayor, I also committed to working with cities and businesses in the United States, with which Mississauga has close economic ties, to underscore the importance of striking a balance and eliminating retaliatory tariffs and restoring free and fair trade for both countries in support of their local communities.

“I want to thank Councillor Karen Ras for moving this motion on my behalf and for Council’s unanimous support. I would also like thank the Mississauga Board of Trade for their support.

“As a municipal leader, I am a strong supporter of free trade and remain hopeful that a fair NAFTA deal will be reached.” 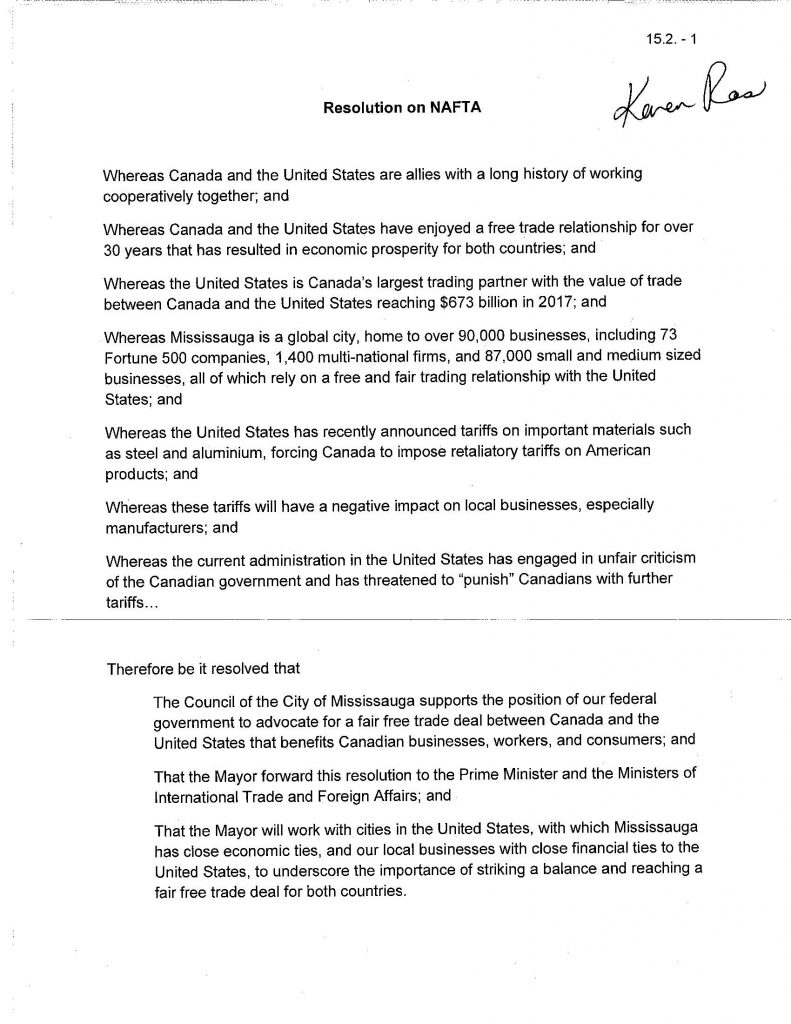