Let me begin by wishing you and your family a Merry Christmas, happy holidays and all the very best in the New Year ahead. I am writing to personally update you about the exciting and transformative city-building initiatives that Council, staff and our community are undertaking together, as we build a brighter future for all of Mississauga.

Looking back over the past three years, we have so much to be proud of and we’ve only just begun. Here is a highlight reel of my time as Mayor so far: 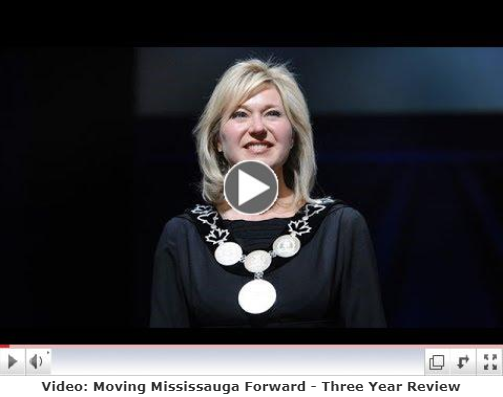 For the fourteenth straight year, Mississauga retains its Triple-A credit rating. This means start-ups and established companies can confidently do business in Mississauga. It’s an important part of our value proposition to attract and retain foreign-direct investment opportunities. Following our 2015 Economic Development Office Investment Mission to South America, Brazilian-based pharmaceutical giant – BioLab – chose Mississauga for its new research and development centre. In October, BioLab officially opened this state-of-the-art facility. It’s a $56 million investment that will create new high-value added jobs. It will add significant revenue to our tax base that will be used to keep property taxes low and to invest in the quality public services we all rely on, including public transit.

We are on track to get construction underway in 2018 to build the fully funded Hurontario Light Rail Transit (LRT) system. The 20 kilometer – 22 stop LRT – will connect GO Train stations from Port Credit and Cooksville. It will loop around the downtown and be plugged into MiWay bus service and the Square One GO Bus Terminal – the second busiest terminal in the GO Bus network. In November, we opened the Renforth Gateway. This is the most eastern station on the Mississauga Transitway.

Mississauga’s growing residential and employment population reinforces our bigger efforts to bring about all-day, two-way, GO Train service on the Milton and Kitchener lines with our Missing Link plan. Improved transit service is critical to our city’s future. It continues to be at the heart of our government relations efforts.

Like the private sector, we’ve built Lean into the City of Mississauga’s DNA. Budget 2018 projected savings of nearly $3 million of taxpayers’ hard-earned money. This means a savings of nearly $52 million over the past decade. In our efforts to make government work better and be more transparent and accountable to taxpayers, we introduced recorded votes for all Council votes. Recorded votes improve the way we can engage and inform residents about the city-building decisions and actions taken by Council and staff.

From our sprawling waterfront to our emerging downtown core, we are building a complete city – a place where people can live, work and get to school. Making Room for the Middle is our bold new housing strategy to increase the supply of housing for middle income earners. We have a series of community consultation plans that are shaping neighbourhoods throughout Mississauga. From Vision Cooksville, to Inspiration Lakeview and Inspiration Port Credit; from My Malton – to the Ninth Line Lands – to Dundas Connects – to Britannia Farms and our Downtown21 Plan; Mississauga is growing and building new communities connected by transit and trails; home to parks and community centres, public spaces, and an unrivaled quality of life.

There’s a buzz about our City. All eyes are on Mississauga. But make no mistake: in Mississauga, we don’t leave success to chance. We plan for it. We see it through.

Upon being elected to office, I committed to tackling challenges surrounding youth unemployment. The Mayor’s Youth Employment Expo is part of the agenda to help youth reach higher. Over 70 different public and private-sector, non-profit, post-secondary and government organizations were on hand, including The Greater Toronto Airports Authority, Trillium Health Partners, Scotiabank and the Toronto Scottish Regiment – the Army Reserve regiment for Mississauga.

Research has shown that a strong network and connection to mentors can open doors for youth as they transition into the workforce. These role models provide important support both in navigating the job market as well as helping youth understand the skills and experience required to succeed 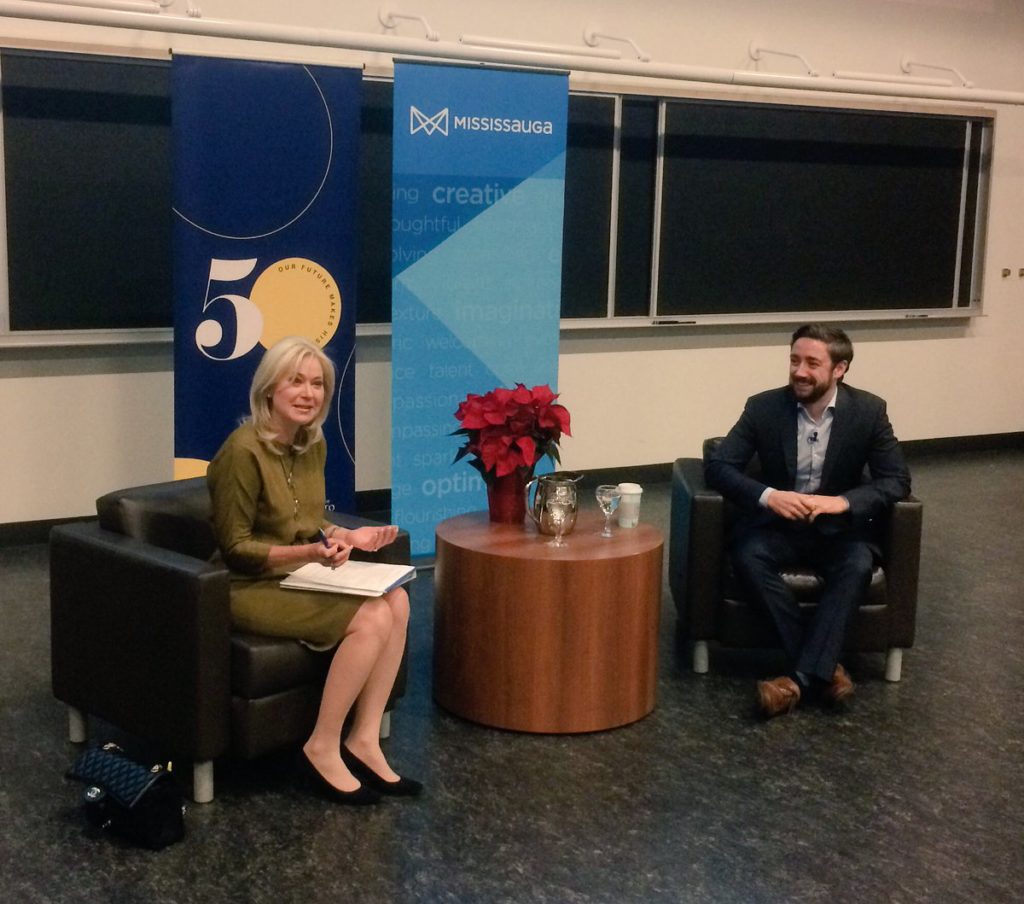 We launched the Mayor’s Youth Speaker Series last year to be an ongoing series of keynote discussions with prominent Canadians from different sectors, aimed at inspiring youth, and providing them with guidance as they prepare to enter the workforce.

Over 200 youth were in attendance to hear from guest speaker Professor Patrick Gunning, Canada Research Chair in Medicinal Chemistry Professor at the Department of Chemical and Physical Sciences at the University of Toronto Mississauga.

Many youth face multiple barriers including slow-job growth economies, low-quality jobs, skills mismatch and social discrimination, among others. We must do everything we can to support local youth to pursue their passions, find employment opportunities and achieve their career aspirations. 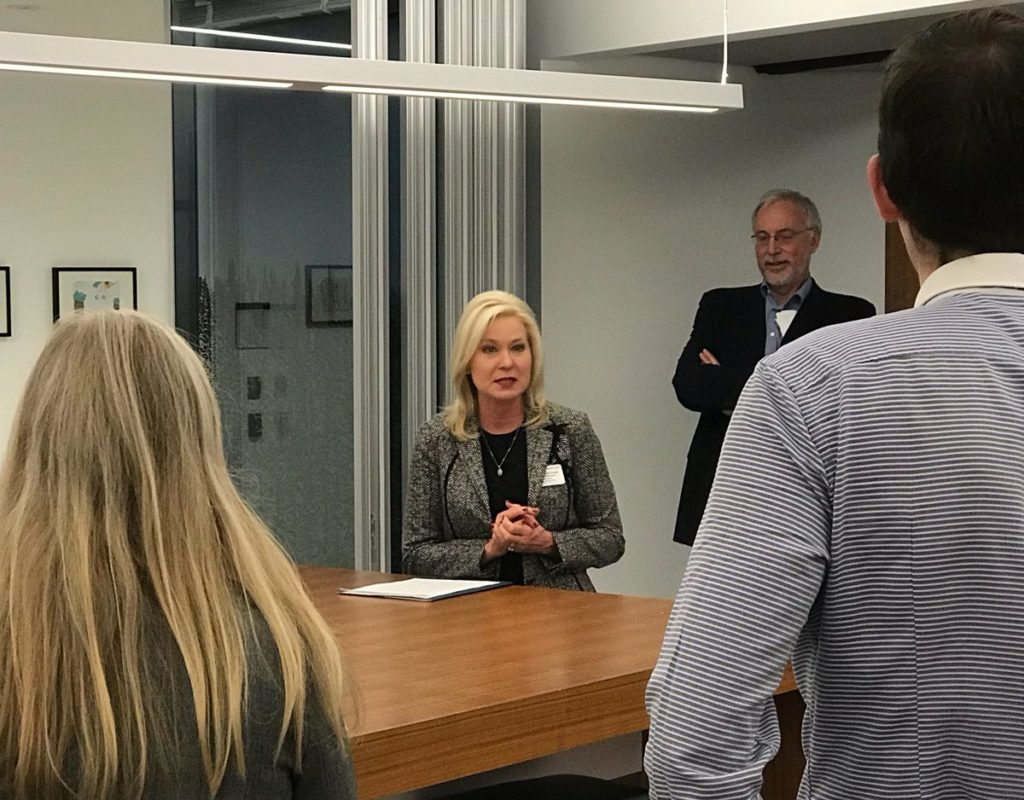 I had the opportunity to join #CdnMuni Innovators to discuss technology; innovation and connectivity at the first ever CONNECT Social Federation of Canadian Municipalities brought together by the FCM’s Innovation Network.

Local government is in the business of making connections.

Whether it is connecting commuters to workplaces; older adults to recreation centres; students to campuses or families to parks; it is a municipality’s job to bring residents together and bring out the best in people.

At every turn, Canada’s cities and towns are thinking outside the box about making things work better.  An understanding and appreciation for how technology can achieve this must be in a municipality’s corporate DNA; detailed and committed to in strategic plans.

The City of Mississauga will be participating in the Government of Canada’s Smart Cities Challenge. Officially announced at the end of November, the Smart Cities Challenge encourages communities to adopt a smart cities approach to improve the lives of their residents through innovation, data and connected technology.

The Challenge is a cross-Canadian initiative open to communities of all sizes, including municipalities, regional governments and Indigenous communities (First Nations, Métis and Inuit). Successful applicants will receive prizing based on population size. 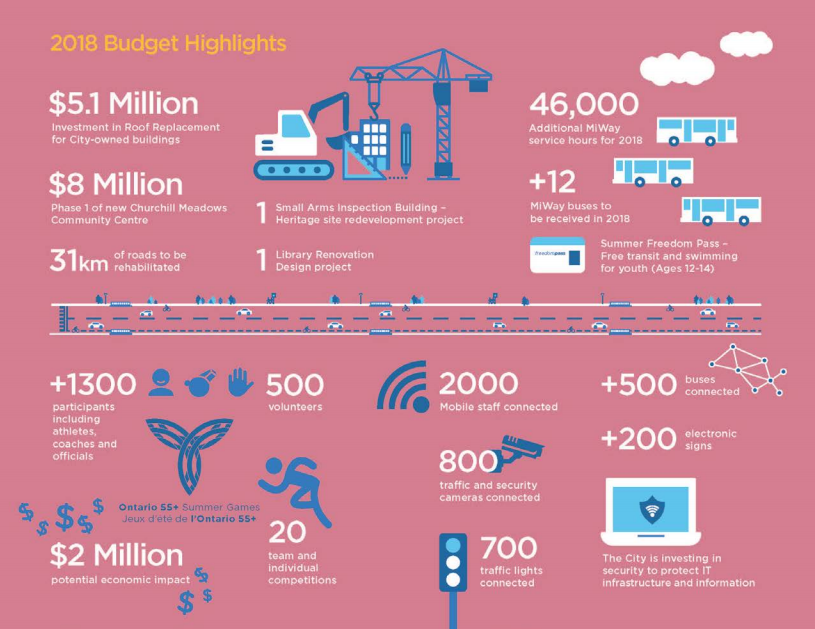 Over the last couple of months, the City of Mississauga has undertaken public questions periods, tele-town halls, and consultations with residents, community organizations and stakeholders. We encouraged resident input through the City’s website, Budget Committee meetings and communication with ward Councillors.

We heard from you loud and clear. What we have put together is a budget for 2018 that addresses your concerns and advances on our Strategic Plan to deliver service and value to the people who live, work, play and raise a family in Mississauga. 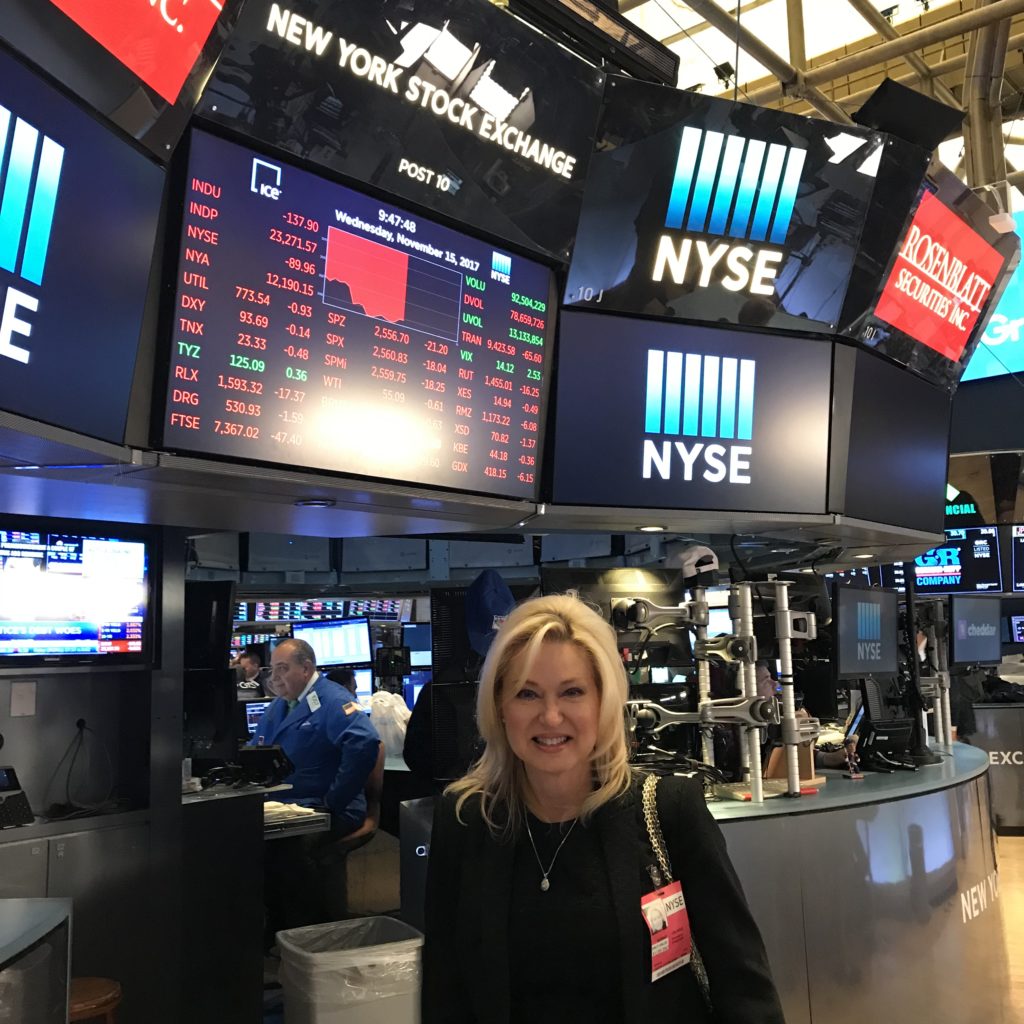 $307 billion – that’s the amount of goods and services the United States buys from Canada every year. That’s more than the amount they buy from the UK, Japan, and China combined.

51% – the percentage of the total foreign direct investment in Canada from the United States.

Needless to say, the American market is vital to our growth as a country. Canada does more business with the United States than any other country. With this in mind, between November 14-16, I joined Mayors Tory (Toronto) and Jeffrey (Brampton), as well as Regional Chairs Emerson (York) and Anderson (Durham) for an investment mission to New York City. Along with representatives from Toronto Global, we took part in meetings with American companies looking to expand to Canada, as well as hosted a reception for over 50 companies interested in what the GTA has to offer. We did meetings together, as well as hosted our own city-specific meetings. 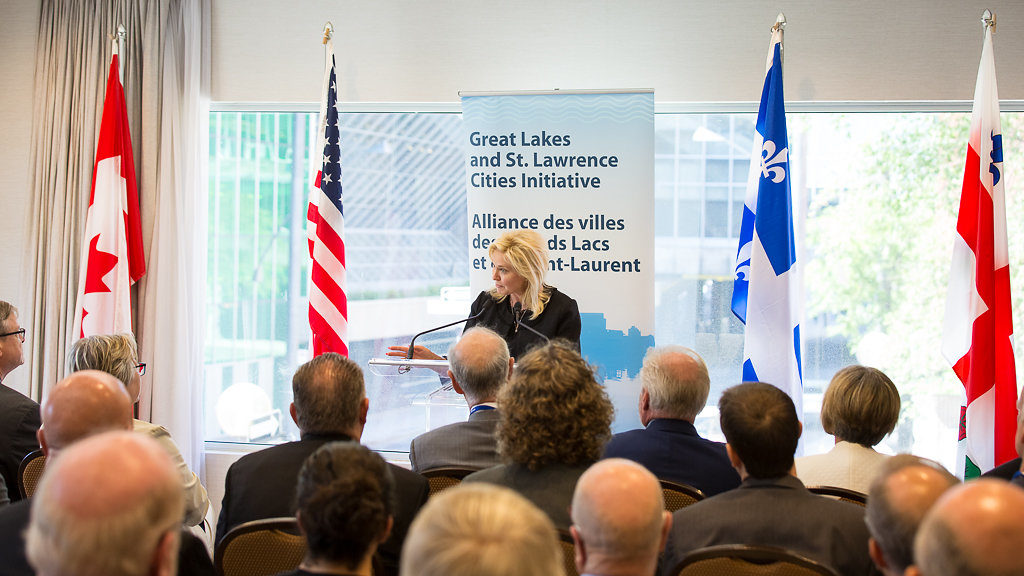 We need to do everything we can to safeguard the health and well-being of our local environment for present and future generations to appreciate and enjoy. As we look toward building Mississauga’s future, we need to think seriously about the environment.

Cities account for approximately 70 per cent of all greenhouse gas emissions produced globally. We have to be part of the solution. Climate change is real. Severe floods and storms are costing communities, they’re costing businesses.

This designation would lead to the largest biosphere on the planet. 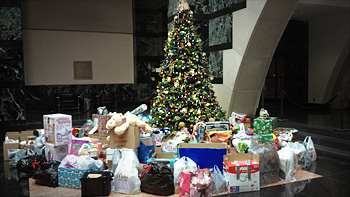 Celebrate the holidays by giving back to your community at the Food & Toy Drive. Make this season bright for local families and children by leaving non-perishable foods and unwrapped toys under the Christmas tree at the Civic Centre. All items go to the Salvation Army’s Christmas assistance program.

The City’s winter maintenance crews clear City roads, priority sidewalks, bus stops and pedestrian crossings within 12-36 hours after the end of a snowstorm. Back to back storms will extend this timing. Local or residential streets are plowed after priority roads are clear. The City’s first priority is safety and access to emergency vehicles and transit.

Please remember to be a good neighbour by helping elderly and disabled individuals clear their snow. Please keep your sidewalks clear of ice to help people travel to school, work and appointments. 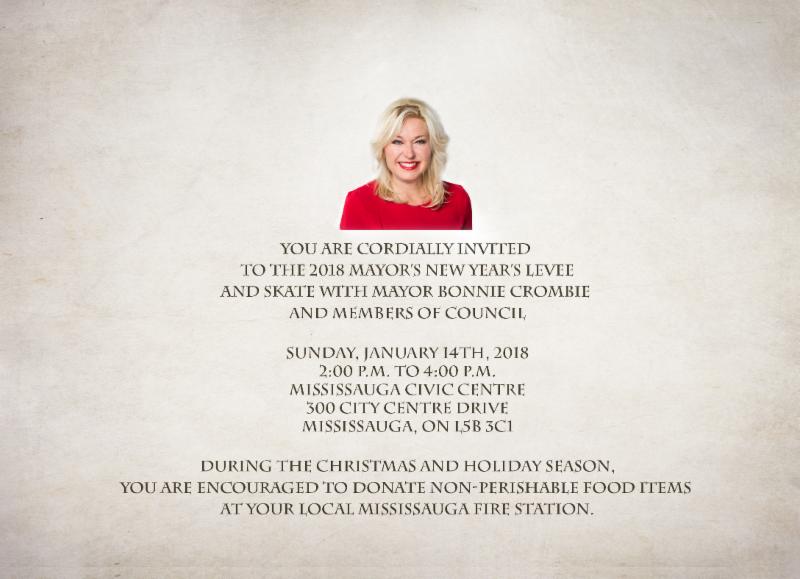 Ring in the New Year at Mississauga Celebration Square – the biggest and best New Year’s event in the city!

We’re kicking the night off with New Year’s Eve jr. from 8-9pm – a big bash before bedtime. Kids of all ages can join us on the NYE jr. dancefloor with dancers, interactive lighting, roaming kid-focussed entertainment, and a junior-sized countdown at 9pm!

Keep up to date with community events,  Council and Committee Meetings, and what’s on at Celebration Square.