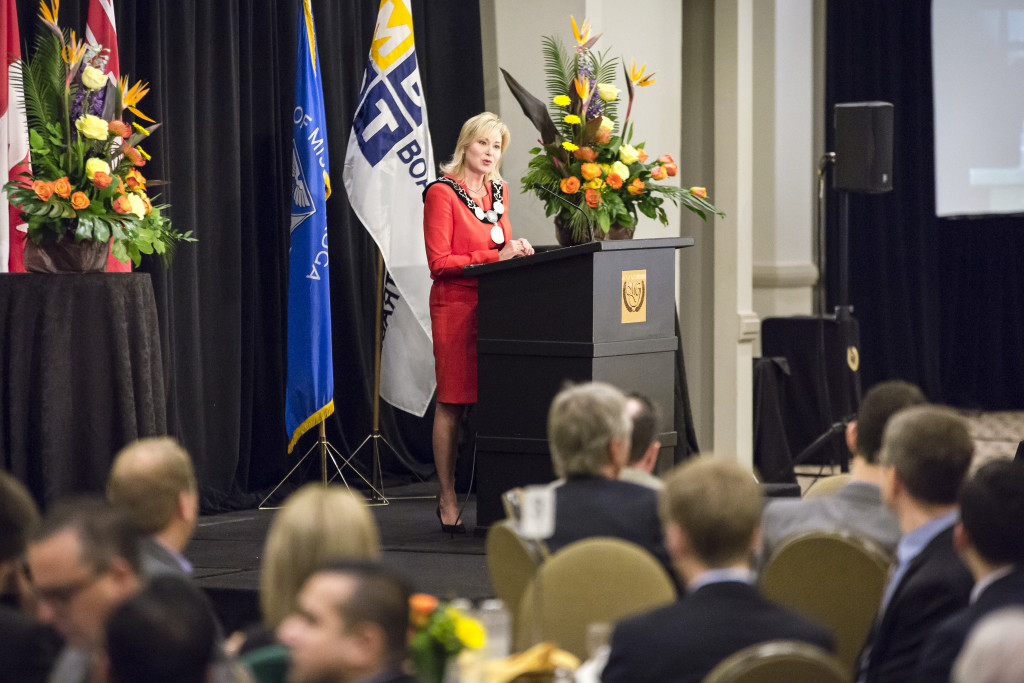 The Mississauga Board of Trade hosted Mayor Crombie’s inaugural State of the City Address in September 2015.

A few weeks back I delivered my inaugural State of the City address during an event hosted by the Mississauga Board of Trade (MBOT).

MBOT holds an important place in our community, representing nearly 1,500 businesses. The leadership of MBOT are respected partners called upon by Council and Economic Development Office staff (EDO) to foster a better business climate for growth.

During my speech to a room of business and community leaders, I spoke at length about my vision to ensure Mississauga has a thriving economy.

I reiterated how local government does not have the same powers as other levels of government.

We cannot offer tax incentives or sign treaties. Like entrepreneurs, we must think outside the box.  So how do we achieve this? My answer has been clear: we build on existing assets; strengthen professional networks; invest in knowledge infrastructure; and bring people together.

This is the mandate of the new Mississauga International Partnership Program Committee (MIPP). MIPP is already leveraging Mississauga’s international expertise and cultural diversity to help our local economy reach its full potential.

Strengthening connections with global communities will better prepare us to welcome international delegations of incoming trade missions to Mississauga, and open our borders to job-creating investments.

My office and EDO staff has met with the Indo-Canada Chamber of Commerce; the Mississauga Chinese Business Association; the Canada-Poland Chamber; along with Consuls General from India, China and Poland.

If we are going to win on the global stage – we must be proactive to attract businesses and industries in our targeted sectors.

In June Mississauga was represented in Philadelphia for the BIO International Convention – the world’s largest life science conference.

We are home to the second largest life sciences cluster in Canada. Our Pill Hill community is a thriving hub for the health sector. We have more than 380 life science companies that employ more than 25,000 people.

The University of Toronto Mississauga and its Academy of Medicine, undertakes cutting-edge research and graduates talented men and women into the fields of medicine, healthcare, and commerce.

At BIO we shared Mississauga’s success story with industry experts and investors, and built relations in this leading industry. It was imperative that we were there.

Mississauga and the GTA have a strong value proposition. It is critical that we sell our City to growing economies. We started work in Brazil in 2010, to scout new opportunities. Since then we have had sixteen companies invest in the GTA.

This led to our August trade mission to South America. We sat down with counsels general; we heard from trade commissioners; we met with chambers of commerce; and we presented to industry associations. In total we had over fifty meetings, in three countries, over eight working days, connecting with over one hundred businesses.

Trade missions are about building lasting relationships and making connections and local government is in the business of making connections. A big component of my job is to bring people together. This is what community is about.

We opened the doors of the Civic Centre to start ups like PaymentEvolution; Web4Realty; Xumme; and Kabuk – a new healthcare company that connects Canadians to health providers, and enables them to book appointments directly online.

We hosted seasoned investors looking for their next big venture. During First Look I also launched the Mayor’s Innovation and Entrepreneurship Taskforce.

The goal of this new working group is to bring together leaders from business, government, and academia to identify practical solutions that Council can implement so Mississauga grows further into a hub of innovation.

I am delighted UTM’s Deep Saini and Sheridan’s Jeff Zabudsky both agreed to serve; shape objectives; and achieve goals, as part of this taskforce.

All levels of government have a responsibility to ensure people have access to quality education. Investing in education is city building.

UTM injects over one billion annually into Peel Region, with the bulk of the share going to Mississauga. With the addition of the Innovation Cube Accelerator, this campus continues to assert its own identity and reputation for research excellence.

As UTM thrives and grows; so does Sheridan. If you’re in our City Centre, you will see plenty of cranes and construction.  Phase two of the Hazel McCallion Campus is well underway, on nearly nine acres of prime land made possible through a partnership between Mississauga and Sheridan.

As I begin to reflect on my first year in as mayor of this great City, we all have so much to be proud of. We are reaching further into global markets, marketing Mississauga to the world, and attracting new economic development opportunities.

We are building a thriving economy.