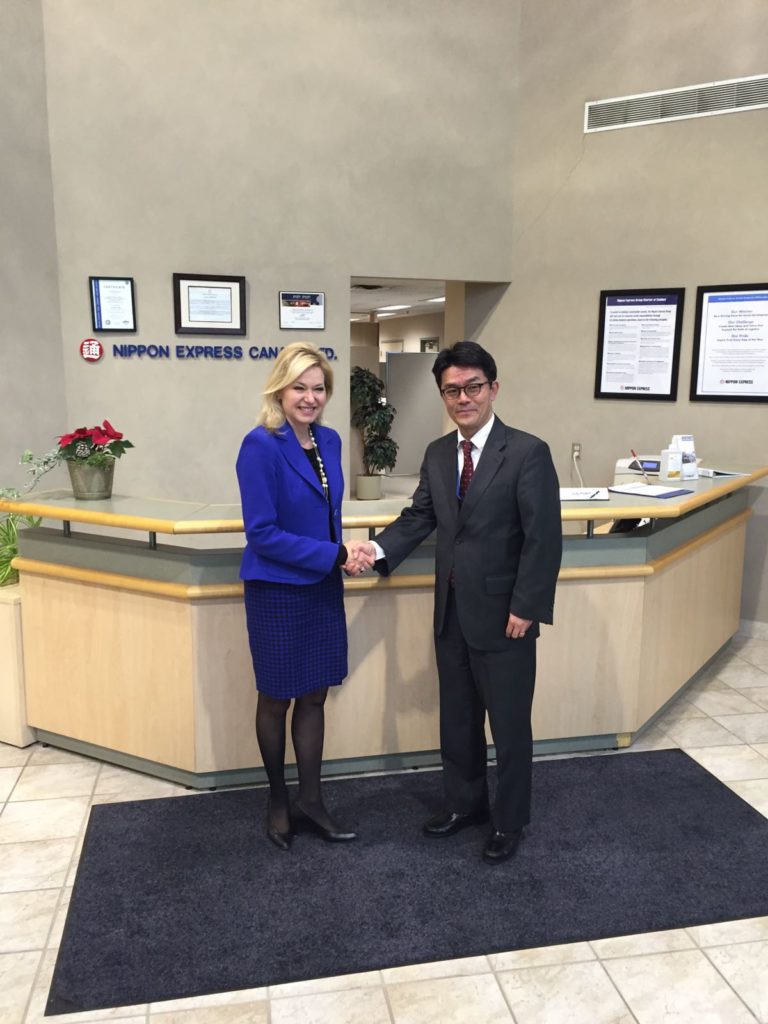 Today’s meeting with Nippon Express Canada is an opportunity to build on the success of our 2016 City of Mississauga Investment Mission to Japan, Mayor Bonnie Crombie said today.

Mayor Crombie made the comments while meeting with corporate leaders and employees from Nippon Express Canada, a global logistics company that has operated an office in Mississauga since 1983 and employs 100 people.

“Nippon Express Canada is proof Mississauga’s economy is strong. We have become a net importer of jobs – more people come to work in Mississauga daily than leave.”

Mayor Crombie was joined by Mississauga EDO staff, along with Yoichi (Jet) Satake, President, and Tsustomi Okabayashi, General Manager, who work based out of the Mississauga office. Nippon Express boasts 387 locations in 37 countries globally. Its primary business in Ontario is the movement of air cargo, logistics and trucking, and ocean-bound cargo.

Mayor Crombie first met with representatives from Nippon Express while in Tokyo, during a City of Mississauga Economic Development Office (EDO) led Investment Mission in April 2016.

“Retaining and attracting foreign-direct investment is an ongoing effort. Meetings like the one we held today allow us to better understand the needs and priorities of companies and how the City of Mississauga can help businesses meet and achieve their goals.”

“Mississauga has over 100 Japanese companies, more than any other city in Canada,” Mayor Crombie said. “Servicing Mississauga’s relatively large share of Japanese companies through businesses retention and expansion activities remains an ongoing priority for the EDO team of professionals.”

“Mississauga is at the heart of a vast network of railways, highways and Canada’s largest airport – Pearson International – which makes a leading destination for logistic companies to invest, expand and reach customers in global markets,” Mayor Crombie added, citing how Mississauga is only 90 minutes from the US border and within a day’s drive to 141 million people.

Speaking further about Mississauga’s economic competitiveness, Mayor Crombie highlighted how “in 2016, the City of Mississauga issued building permits for $1.3 billion in construction.” Our numbers were driven by a strong mix of commercial, industrial and residential building, Mayor Crombie said, adding that commercial and industrial activity accounted for a combined $469 million.

“I am proud that Mississauga is home to a number of globally-respected, successful and innovative Japanese-based companies like Nippon Express Canada,” Mayor Crombie concluded.