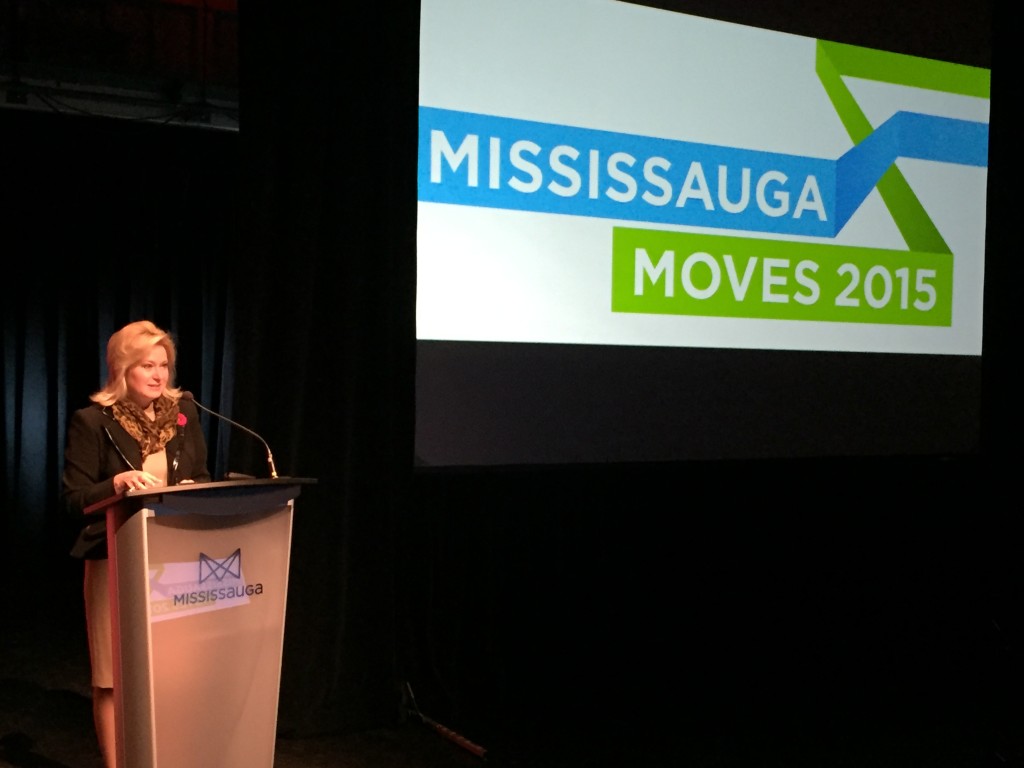 Mississauga Mayor Bonnie Crombie speaking to a room of nearly 250 participants during the Mississauga Moves 2015 Transportation Summit at the Living Arts Centre.

Mississauga is a City Committed to Building Transit: Mayor Crombie

The following are remarks by Mississauga Mayor Bonnie Crombie delivered during the Mississauga Moves 2015 Transportation Summit at the Living Arts Centre:

“On behalf of the team of professionals from the City of Mississauga and Members of Council, welcome to our first-ever transportation summit – Mississauga Moves 2015.

“Throughout the day, participants will join local and international experts and take part in interactive workshops and presentations.

“We have intentionally brought in outside experts to learn about best practices being implemented around the world, so that we can think about the implications for our City.

“As we look toward our future planning needs, it is fundamental that we all of us to take ownership to make Mississauga an even more dynamic place to pursue one’s dreams.

“Now I’m challenging each of you to roll up your sleeves, and get to work.

“In your discussions today, I encourage you to keep in mind one question: How does Mississauga want to move into the future with its transportation system?

“We are here to listen.

“Your questions, ideas and answers will be captured.

“They will be used to help draft a comprehensive Transportation Master Plan next year which has a 25 year time horizon into the future.

“This plan will be our roadmap to ensure we set – and achieve – our future transit needs.

“The outcomes from today’s event will be a reflection of Mississauga’s values.

“The exhibitor area in the Atrium has information on all of the great projects and initiatives that the City is leading.

“It also includes initiative being undertaken by some of our partners, including: Peel Region; Smart Commute; Metrolinx; The Greater Toronto Airports Authority; ZipCar, and Autoshare.

“Thank you for being with us.

“To help get the conversation started, I want to reflect on all that we have accomplished at the City of Mississauga, and all that we planned.

“When they look back on Mississauga and the Greater Toronto Area a century from now, it will be said that this period ushered in a public transit renaissance.

“It will be remembered as the day Mississauga changed for the better.

“The LRT is a game changer.

“It is the single largest infrastructure investment in Mississauga’s history.

“It is truly transformational, and it is already shaping how our City will grow for decades to come.

“Some of the most pressing priorities we must address have to do with how we move people; goods; services; and ideas; and how we develop to meet the needs of new residential and commercial investments.

“We have become a net importer of jobs – yes, more people come to work in Mississauga daily than leave.

“Last year the City issued over one billion dollars in building permits.

“That’s a fifteen percent increase from the year before.

“We are a City in demand.

“A recent survey found that Mississauga ranks as the tenth hottest destination to find a job in Canada.

“Over the next two decades, Peel Region will need to accommodate approximately 150,000 jobs and over 300,000 people, many of which will be right here.

“Nearly a quarter of that growth is expected to live and work in the area immediately surrounding the Hurontario-Main corridor.

“We are planning new and important intensified developments, consistent with the requirements in the Places to Grow Act.

“But these plans would not be possible without full funding for the LRT.

“The LRT will connect GO Train Stations from Port Credit to Cooksville.

“It will run through City Centre and unleash the potential of our downtown core, allowing us to more aggressively get on with our Downtown 21, plan.

“The LRT will be linked to our MiWay Bus Rapid Transit System.

“It will result in a more seamless travel experience for students to get to class at Sheridan College; enjoy a community festival at Celebration Square; take in a memorable performance at the Living Arts Centre; and shop for premium brands at Square One.

“The LRT will connect neighbourhoods throughout Mississauga.

“Make no mistake, years of commitment and hard work led to that April announcement.

“Mississauga has been at the table from the very start.

“Our fingerprints are all over the blueprints.

“Council ensured the LRT was at the heart of our pre-budget submission to the province.

“While the LRT will be the north-south spine of a regionally-integrated rapid transit network; the Mississauga Transitway has proven to be an essential east-west corridor.

“In September, the Erin Mills station became the latest Transitway stop to open, with another stop opening this fall at Square One.

“The Transitway now heads west, and will further serve residents when the Winston Churchill station opens next year.

“When fully complete in 2017, this express route will make it easier for people to live their lives.

“Despite this great progress, we are not satisfied.

“We want to make it even quicker and easier to move and bring people together.

“This is the purpose of today’s summit.

“This is also the purpose of regionally integrated transit.

“And once again, this City Council has stepped up, shown leadership, and is driving the transit file forward.

“In June Mississauga brought together the municipalities of Toronto, Cambridge, Kitchener, Waterloo and Milton to get our communities moving.

“We initiated a business case study to build a new rail route that will connect the CP Line, just west of Trafalgar, with the already existing CN Line that runs through Brampton.

“Well, it wouldn’t be a renaissance if we didn’t challenge the status quo thinking, and raise the level of debate with bold new ideas!

“Never before have a coalition of municipalities like this come together to undertake such an effort.

“There is strength in numbers! And united in a single cause, our voices will be heard.

“Friends, we have found the Missing Link.

“This new line will finally make way for all-day, two-way, GO Train service on both routes.

“It will reinvigorate our transit hubs.

“A project of this magnitude also has national and international implications.

“This line is critical to Canada’s economy.

“It is a Continental Gateway, allowing for the movement of large amounts of goods to and from the central Canadian market.

“We are now witnessing tremendous interest, commitment and momentum by all governments to invest in large-size transit projects.

“The new Trudeau government has committed to quadrupling federal investment in public transit, invest nearly $6 billion over the next 4 years, and $20 billion over 10 years in green infrastructure, to generate economic development opportunities.

“These are new and unprecedented opportunities for municipalities, and now it is time to get to work.

“Because of the magnitude of the Missing Link, there is a strong case to be made that the federal government must be at the table moving this plan forward.

“I’ve talked about our BRT, our LRT and all-day, two-way GO service. But that’s not where we stop.

“And, we continue to move the transit file forward by seeking opportunities to study potential new transit lines to meet future demands.

“If we don’t start this today, we will be way behind tomorrow.

“Mississauga is a City committed to building transit and investing in our future.

“We know that in order to build a 21st century city, we need to be able to move people and goods efficiently and effectively.

“The decisions we make here today will shape how we plan our transportation networks for years to come.

“So, once again, thank you for joining us for this important discussion.

“I look forward to hearing your ideas and solutions to help us build a world-class transit system that meets the demands of Canada’s sixth largest city.