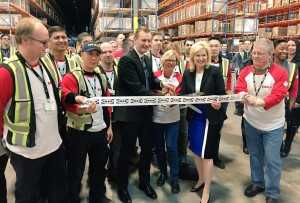 “This new facility is an impressive footprint, at nearly 400,000 square feet,” Mayor Crombie said, adding that IKEA has six distribution centres throughout North America, including this new Mississauga facility.

Employment opportunities at the facility are available in a variety of functions including HR, Operations, Warehouse Management and Logistics.

Stefan Sjöstrand, President of IKEA Canada, added that “It is an exciting time for IKEA in Canada as we become even closer to our customers than ever before, today’s grand opening is the first step in truly transforming IKEA into a true multi-functional retailer.”

Speaking further about Mississauga’s economic competitiveness, Mayor Crombie highlighted how “in 2015, the City of Mississauga issued building permits for $1.3 billion in construction. This is a 10 per cent increase over last year.”

“Put simply, we are a City in demand for investment, expansion and opportunity,” Mayor Crombie added.

“IKEA is proof Mississauga’s economy is strong. We have become a net importer of jobs – more people come to work in Mississauga daily than leave.”

Mayor Crombie concluded “On behalf of the City of Mississauga and Members of Council, we are all delighted to be part of this important milestone, as Mississauga welcomes IKEA’s new distribution centre to our community.”