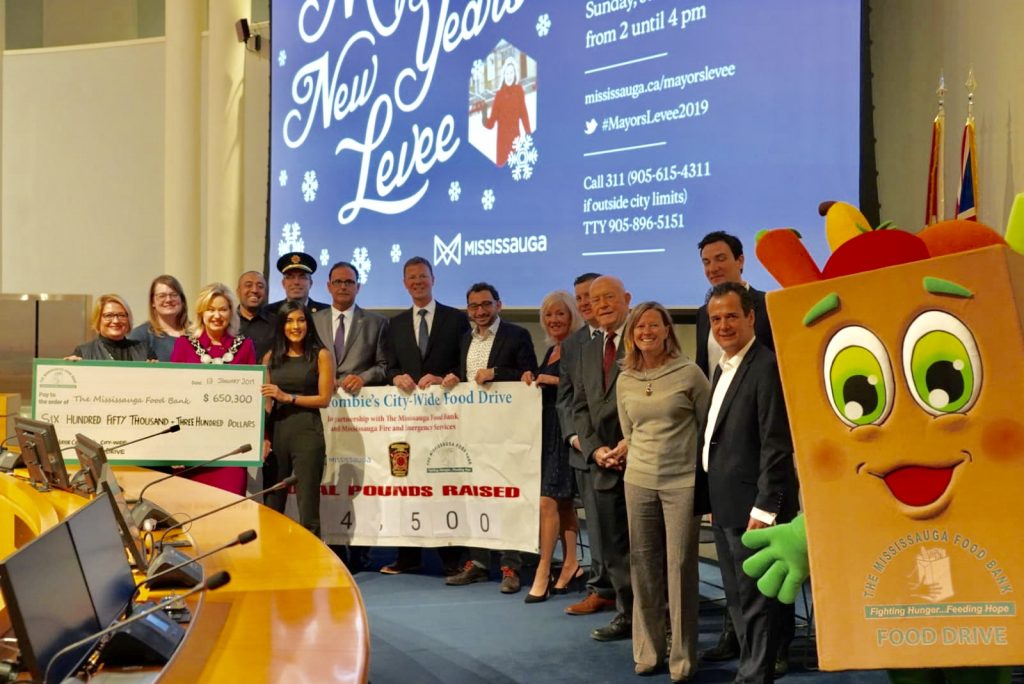 “This Holiday Season, Mayor Bonnie Crombie challenged the citizens of Mississauga to participate in her annual City-Wide Food Drive and feed hungry neighbours across the city.

Today, at the Annual Mayor’s New Year’s Levee, Mayor Crombie announced that the campaign raised a record total of $650, 301and 404,500 pounds of food in support of The Mississauga Food Bank.

This brings the total amount of food and funds raised by the campaign to over 1 million dollars and 1 million pounds since it began in 2015.

“I’m proud that once again we’ve broken our record, raising more food and funds than ever before to provide support to our neighbours in need,” said Mayor Crombie. “Since we started this food drive challenge in 2015, our community continues to grow in its generosity – showing that Mississauga truly is a city that cares for its neighbours. I thank and celebrate all residents, schools, businesses, and community groups who made this possible.”

This holiday campaign came at a crucial time for The Mississauga Food Bank, as the number of visits to their neighbourhood food banks increased 15% over the previous year since June. Funds raised in the campaign will ensure the food bank can purchase and distribute healthy, fresh food for over 1 million meals for neighbours who use the food bank year-round. The food raised is enough to keep up with demand through their network for the coming 7 weeks.

“Going into the holiday season knowing we had so many more hungry neighbours to feed was daunting,” said Meghan Nicholls, Executive Director of The Mississauga Food Bank. “But we’re thankful that the incredible support from Mayor Crombie and her staff and an outpouring of support from local community groups, businesses, and individuals made this campaign a success.”

The campaign – which ran from November 24 to January 7 – was sponsored by Tim Hortons Restaurant Owners of Mississauga, Rabba Fine Foods, and Just Energy. Mayor Crombie’s Corporate Challenge was sponsored by Wynn Fitness Clubs.

For more information about how you can help hungry neighbours year-round, please visit www.themississaugafoodbank.org

The Mississauga Food Bank is the central food bank in Mississauga. Through its network of 50 member agencies – including neighbourhood food banks, hot meal programs, and breakfast clubs – they distribute food for over 2.6 million meals each year.