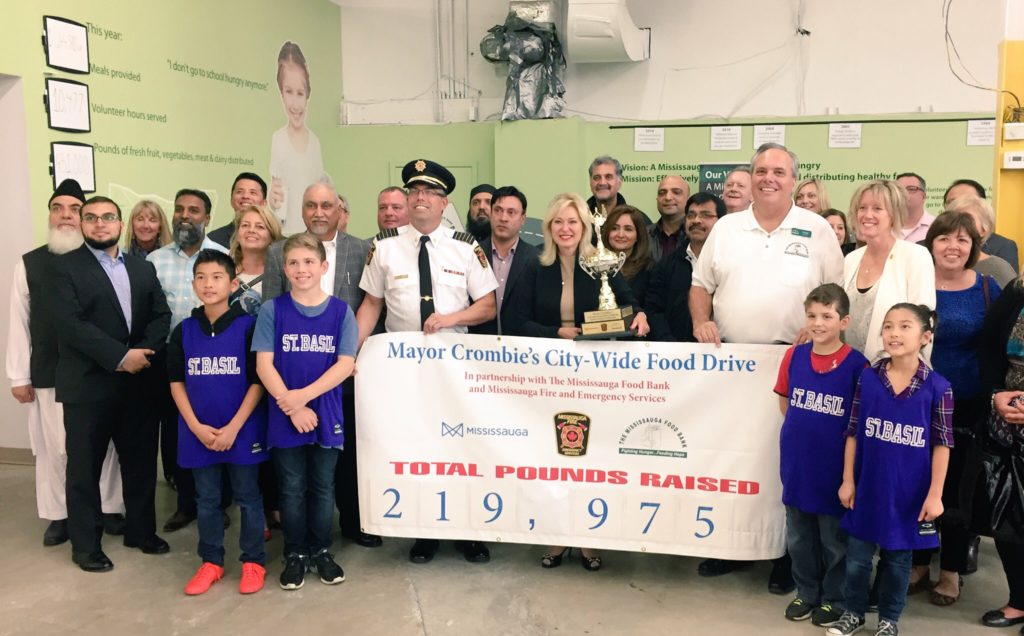 The 2016 Food Drive Challenge aimed to raise $100,000 and 200,000 pounds of food by October 14. All food and monetary donations collected as part of the Mayor’s Citywide Food Drive #OneBagChallenge go to The Mississauga Food Bank to be administered and distributed to their agency partners.

“On behalf of the City of Mississauga and Members of Council, let me thank all the citizens and community groups who came together to participate in this year’s 2016 Mayor’s Citywide Food Drive #OneBagChallenge!”

“Let me single out Chief Tim Beckett and the compassionate and dedicated professionals from Mississauga Fire and Emergency Services,” Mayor Crombie added. “Without their support, today would not have been possible. They opened up their fire halls throughout the city and welcomed and encouraged people to donate toward such an important cause.”

I also want to recognize Chris Hatch, Executive Director of The Mississauga Food Bank, and the organization’s dedicated staff and agency partners, Mayor Crombie said, adding that “this campaign may have lasted a month but our efforts to elevate the quality of life for people in need are something that we all must work toward each and every day.”

“The Annual Thanksgiving Drive has been a crucial campaign for the food bank for the last 30 years. However we have never seen an outpouring of generosity like this before,” said Chris Hatch, Executive Director of The Mississauga Food Bank. “Words cannot begin to express our appreciation and gratitude for Mayor Crombie’s tremendous leadership of this year’s food drive campaign. We could not have achieved these results without her enthusiastic support and that of the entire Mississauga community.”

As I look back on the past few weeks I am humbled by the outpouring of support for the #OneBagChallenge, Mayor Crombie said, highlighting a number of individuals and organizations for their contributions.

Mayor Crombie concluded “I have always said Mississauga is a city that shines – we shine because of our thoughtful, compassionate and generous citizens who are committed to being good neighbours, helping neighbours. My heartfelt thanks once again to everyone who donated their time, talent and treasure toward making this year’s food drive a complete success.”