The second destination visited on the Ontario Business Mission to India was Chadigarh, a city and union territory in the northern part of India that serves as the capital of the states of Punjab and Haryana. Chandigarh and the adjoining cities of Mohali (Punjab) and Panchkula (Haryana) are together called Chandigarh Tricity. In 2015, the government of India under Prime Minister Modi launched the Smart Cities Initiative – an urban renewal and retrofitting program focused on India’s rapid growth, it’s challenges and opportunities. The goal is to sustainably develop 100 cities throughout India while promoting economic growth, strengthening governance and improving the quality of life for local residents. In collaboration with the Union Ministry of Urban Development the state governments of the participating cities are responsible for the implementation of the program. In order to develop a Smart City, each must commit to establishing a plan which includes the following:

1.    Submitting a bold vision – Bigger doesn’t necessarily mean better. Each idea must reflect local context, it’s resources, and the priorities and aspirations of its citizens;
2.    A Pan-City Initiative – Incorporate the use of technology, information and data to improve services or to improve efficiencies and the overall experience for citizens;
3.    Develop an Area-Based Plan – Turn your vision into reality which will transform an existing place into a model for other cities to follow.

Depending on local need and circumstances, cities are able to choose one of three approaches to achieving a “Smart City”, including retrofitting, redevelopment or greenfield development. A number of cities throughout India, including Hyderabad, Amritsar, Jaipur, Jalandhar, Kochi and many others have submitted proposals and have committed to taking part in the challenge. Countries around the world have also taken part including Bangkok, London, Istanbul, Los Angeles, New York and many more. In Hyderabad specifically, there were a number of complaints received from the public related to garbage, street lighting, road maintenance etc. The Smart Solution was to utilize technology to streamline complaints and improve service delivery. The system includes over 4,000 citizen service centres, a 48-hour response deadline and the ability to escalate a complaint by contacting local officials. In addition, there are 12 monitoring vehicles that are responsible for patrolling 2,000KM of Hyderabad and reporting any potential problems that may exists. This solution greatly impacted the overall quality of life and improved the relationship between local government and its residents. Today, 30% of complaints are made online, and a mobile app was launched in partnership with the private sector making reporting seamless and more efficient.

The City of Mississauga is always striving to improve services in a smart and sustainable way. As our Director of Information Technology and Chief Information Officer, Shawn Slack, articulated, we have an “IT Master Plan” that focuses on four key goals: open and accessible government, offering decisions through research and analytics, fostering a connected and engaged workforce and driving innovation. As a City, we have implemented a number of initiatives that benefit our residents including: Advanced Traffic Management (ATM), LED street lighting retrofits, placing sensors in our waterways to detect excess precipitation which would trigger a three tier alerting system and smarter transit by way of Transitway – a dedicated road by which “higher-order” buses will run and all transit stations will be fully automated. We have been working in partnership with Cisco on the co-development of smart city technology in addition to working with Sheridan College and other institutions. The City of Mississauga recently launched the Mississauga Roads App which allows residents to get updates on winter operations (plowing and salting of roads), the ability to view emergency road closures or congested areas which would otherwise slow your commute and the ability to see current road conditions with live traffic cameras. I have also been a champion for innovation – in 2015, I launched the Mayor’s Taskforce on Innovation and Entrepreneurship and hosted “First Look” – the city’s first ever Angel investor networking opportunity event. I am also thrilled to announce that on March 5th, we will be hosting “Code and the City” Hack-a-thon with Sheridan College and the University of Toronto to mark International Open Data Day. As a city, in 2010, we were earlier adopters of open data and one of the first 12 public sector agencies in Canada to publish open data on the City’s website. We will continue to strive to provide the best possible services, reduce costs, drive efficiency and foster innovation to ensure we remain leaders in technology. 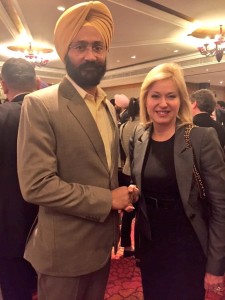 We also had the opportunity to connect with a number of government officials, including, Mr. J.M. Balamurugan, Secretary Local Government Punjab & CEO, Parminder Singh Dhindsa, Finance and Planning Minister, and Jathedar S. Tota Singh, Agriculture Minister, Punjab. I took the opportunity to introduce Mississauga to each dignitary and walk them through our strengths as a city, as well as our major priorities. We discussed Smart Cities and Mississauga’s role, the Hurontario-Main Light Rail Transit Project, our Downtown 21 Plan, Inspiration Port Credit, Vision Cooksville and Sheridan Park, among others. It was an excellent opportunity to showcase our city and exchange information and best practices. 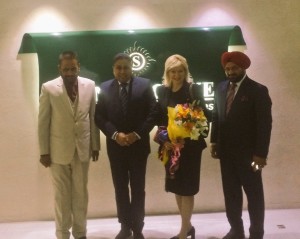 Meeting with Mr. Bajwa of Bajwa Developers Limited to discuss potential investment opportunities in the City of Mississauga

In addition to meeting with government officials, we also had the opportunity to meet with potential investors, including Bajwa Developers Limited, an infrastructure development company. We discussed a number of investment opportunities and sought to identify synergies between the City of Mississauga and Chandigarh. Bajwa Developers is interested specifically in the tourism and hospitality sector and is considering options in the Greater Toronto Area to invest. After pitching Mississauga, I have no doubt that they will choose our city as the ideal location, not only because of our proximity to the airport, but also because of our developing downtown core and plans for intensification. 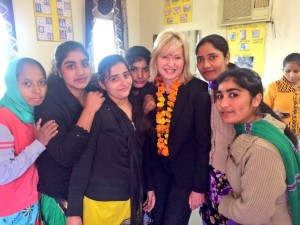 Following our meetings and plenary sessions, I was able to visit the Mehar Baba Charitable Trust  (MBCT) to discuss their JAGO project. It was a very emotional, difficult yet inspiring experience. MBCT’s mission is to empower rural women and provide them with medical care, education, and social services. The organization serves over 209,000 underprivileged women living in 186 villages in the Fatehgarh Sahib district in Punjab, India. The initiative receives support from the Canada Fund for Local Initiatives in India and focuses on the prevention of violence against women and the forced marriage of women.  This is an issue that is close to my heart. During my time there, we witnessed young women training and learning skills such as garment making, sewing, machine embroidery and rug making. We were also given the opportunity to visit a local village and take part in a Jago ceremony to celebrate the birth of a baby girl. Jago, which means awakening, is being used as a metaphor to awaken villagers to the current reality of violence against women and girls, inform communities on factors contributing to violence, and work to create a secure village-level environment. 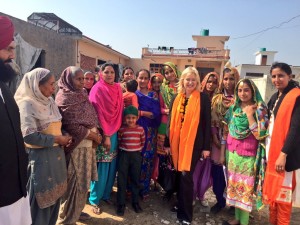 At a Jago ceremony in Punjab

The experience serves as an excellent reminder that violence against women is still a reality around the world, including back home in Mississauga.  According to the Canadian Women’s Foundation, half of all women in Canada have experienced at least one incident of physical or sexual violence since the age of 16. Approximately every six days a woman in Canada will be killed by her intimate partner. In Mississauga, organizations such as Interim Place and the Family Transition Place offer support and shelter for hundreds of Mississauga women in crisis. We have made great strides in Peel to create resources to both prevent violence against women and provide safety and shelter for those escaping violent domestic situations, but there is still much work to be done. Our objective must be to ensure that every woman in Mississauga feels safe and I will continue to work with my colleagues at Peel Region to ensure this becomes a reality. For more information about services and support available to victims of domestic abuse in Peel, visit PCAWA (Peel Committee Against Woman Abuse) at www.pcawa.org.

Lastly, we were privileged to join Mr. Mohamed Dhanani, Executive Officer of His Highness Prince Aga Khan Shia Imami Ismaili Council for Canada, at the Aga Khan Academy, Hyderabad as well as Mr. Amit Chakma, President & Vice-Chancellor of the University of Western Ontario. This not-for-profit school is the second in a global network of day/residential schools for exceptional children, from all backgrounds, from across India and internationally. The Academy will accept students with high leadership potential and it is as much about desire and character as it is about academics. Regardless of faith, origin, gender or the ability to pay, students are accepted based on merit. In 2015, Premier Wynne welcomed His Highness the Aga Khan to Queen’s Park for the signing of a historic Agreement of Cooperation between the province and the Ismaili Imamat. The agreement identifies areas of cooperation and joint initiatives to foster capacity building and the exchange of knowledge and expertise. Today’s youth are tomorrow’s leaders, and there are few things more important than helping them achieve their dreams, through hard work, determination and creativity, In January, 2016, I launched the Mayor’s Youth Speaker Series – an ongoing series of keynote discussions with prominent Canadians from a variety of sectors aimed at inspiring youth in Mississauga and providing them with guidance as they prepare to enter the workforce. The first event featured a keynote and Q&A session with award-winning journalist Amanda Lang of Bloomberg News. I was thoroughly impressed and inspired by the youth who attended the Academy – they were ambitious, thoughtful, and inspired to reach great heights.. As Nelson Mandela was famously quoted, “Education is the most powerful weapon which you can use to change the world”. I encouraged them to come to Canada to study, specifically Ontario, and of course to choose of our esteemed post-secondary institutions in the City of Mississauga, including, the University of Toronto, Mississauga and Sheridan College. 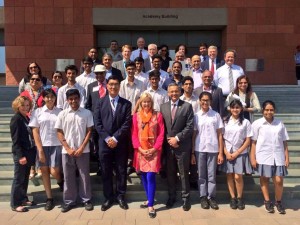 Although our visits to both Chandigarh and Hyderabad were short, I had the opportunity to make incredible and lasting connections with local government officials, business and community leaders, investors, and many others.. Uncovering investment opportunities takes time, however, with patience and perseverance I am confident the relationships and networking opportunities are a step in the right direction to establishing partnerships for future investment. Mississauga is home to a significant Indian diaspora and we have the potential to ignite new economic development and investment opportunities.

This afternoon we leave for Mumbai – the economic heart of India. I look forward to networking and meeting with some of India’s top businesses.