Mayor Crombie delivered the following speech at the Canadian Dream Summit in Toronto.
This conference is designed for meaningful collaboration between C-level executives, rapid growth scale-ups, and leaders in tech. 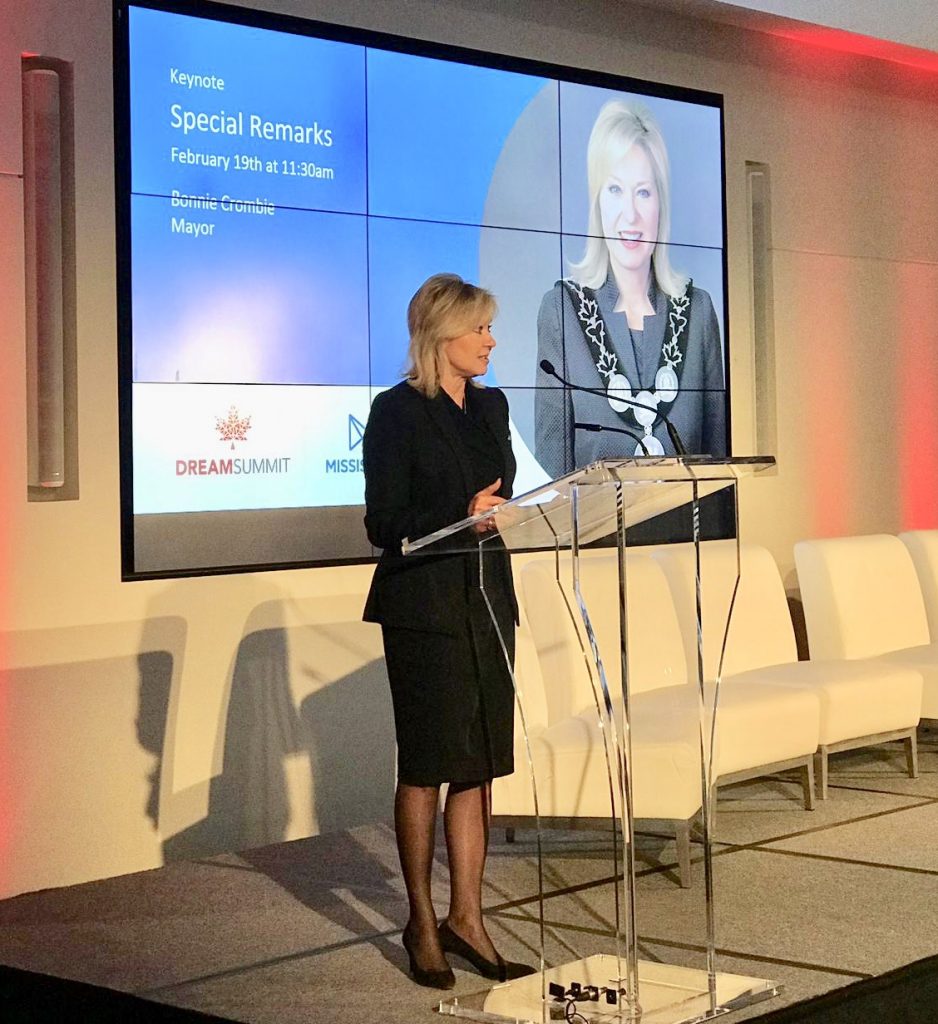 Thank you for the opportunity to be with you here today.

I’ve looked at the program and I am impressed by the vast talent and experience of the panellists and participants of this conference.

Canada’s future is definitely in good hands and I must say, it is as bright as it is limitless.

So, why is a Mayor on a stage talking to people from the tech industry?

A good question. It’s one I asked the organizers when they invited me to speak!

My answer is simple: Cities are where it’s at!

It’s in cities where innovation is happening; where ideas are colliding; where people from every country on Earth come together, live together, and work together…

…It is in cities where we see the manifestation of the Canadian Dream.

As the Mayor of one of the most diverse cities in Canada, I am seeing the Canadian experiment play out on a daily basis. And it’s a success.

We are home to almost 800,000 people from over 200 countries, speaking 150 languages. We live together in harmony.

But more importantly, this diversity sets us apart; it allows us to be innovative; to attract the best and the brightest; and to become leaders.

And, it is one of the key reasons Mississauga is the business capital of Canada.

Other mayors across the country will tell you a similar story about the importance of diversity to creating an environment where innovation can thrive, where new ideas can take hold, and where new businesses can grow and thrive.

So much of our focus is on federal and provincial programs to spur job growth and innovation.

They are necessary and they are working. But the results of these strategies are seen in cities.

As one of the hashtags for this conference says, “#CollaborateLocal”

It is in cities where the rubber hits the road so to speak; where federal and provincial money is put to work; where businesses and people put down roots; and where innovation occurs.

This is why it is critical that cities across the country embrace the 21st Century and become hubs of innovation themselves.

To foster an environment of innovation, we must embrace it ourselves.

Many of us competed in the federal government’s smart cities challenge last year.

We also actively compete against each other for talent and for the jobs and the businesses of the new economies.

It’s why Toronto and Kitchener-Waterloo created the so-called “innovation corridor,”

While our name is not in the title, the innovation corridor runs right through Mississauga.

Toronto is now referred to by some as Maple North – okay, just the Economist! – and Waterloo bills itself as a tech hub…

…but Mississauga is quietly (too quietly for my liking) emerging as a tech hub in our own right.

We have over 700 tech companies – that’s more than Kitchener/Waterloo and Markham combined.

The next phase of our economic development strategy will focus primarily on growing our tech sector, fostering innovation, and putting in place the building blocks for the next generation of entrepreneurs and companies to thrive.

Mayors are competitive, to say the least…

…But when we try to do better and challenge each other, we ultimately end up elevating our nation.

Cities are the drivers of Canada’s economy.

Government is notorious for lagging behind the curve. We are always playing catch-up to where industry is, and where it is going

I would argue that cities are more nimble than any other level of government.

We have to be. We don’t have the deep pockets of the federal or provincial governments. We cannot offer grants or subsidies.

Like cities across Canada, Mississauga embracing technology and working to frankly, keep up with the growth in the tech sector.

We want to be a smart city – in fact, we are developing Smart City Master Plan

We are becoming smart in how we operate – using IOT and our data sets to better plan our cities, our transit, and address traffic. In fact, over 700 of our vehicles are already connected

We are leading the way in putting over 150 data sets online for anyone to use. Through the hack-a-thons we have hosted, new apps have been developed and new businesses formed.

Last year alone over 8 million hours of free wifi was provided in all our public buildings, and at 200 bus shelters

Through district wifi, our four Business Improvement Areas and our downtown are now fully connected

We’re working with other governments and the private sector to build innovation hubs, accelerators, and commercialization spaces for new ideas and entrepreneurs to grow

We are forming partnerships with industry to advance our collective interests.

As Mayor, I want our city to be a living lab – a place where we can issue a public call to industry to help us solve our problems quickly and innovatively.

Fostering an environment where innovation thrives only works if as a city, we embrace and make use of the new technologies

We can be a safe place to test new technology

Perhaps the most important thing municipalities can do is prioritize the tech sector, listen to companies and entrepreneurs, and provide them with the resources they need to succeed

Sometimes this means just getting out of their way!

Government is never going to keep up with industry, but we can help business and those with ideas bring their vision to reality…

…another hashtag of this conference

Perhaps the most obvious example has been Uber.

As cities, we regulate and to a large extent, protect the taxi industry

For decades the public vehicle policy followed the same model.

That is, until Uber came along and blew it out of the water. Uber’s presence in the marketplace marked a seismic shift

It changed consumer behaviour, but also forced us to change policy and make a tough decision – should we regulate and embrace this new, disruptive technology

If you watch the news, you know that this was not an easy decision for local governments to make. Some still haven’t made it.

There are more examples like Uber and they are growing every year.

The changes to our market place are at times frenetic. They don’t mesh well with institutions like government

So, as local governments, we walk a tight rope. We support innovation and the next generation of technology – in fact we crave it for our local economic growth

At the same time, we face challenges putting these new technologies in our existing legislative boxes.

We have to change, adapt, and be ready to embrace what’s next. That is the challenge we face

While technology is reshaping our world in so many ways, it is also levelling the playing field.

It is breaking down racial, economic, social, and so many other barriers that once existed

Whether Twitter has improved our public discourse is a topic of fierce debate, but that it has given everyone a voice is undisputable.

It is no coincidence that those nations that embrace innovation are also those where diversity flourishes. The two go hand in hand

Mississauga, like so many cities in Canada, succeeds because of our diversity of talent

As a society, we are better together.

Walls do not spur innovation

I would encourage all of you here today who are on the leading edge of the technologies and economies of tomorrow to keep as your guiding principle the need to make society whole – to strengthen social bonds; improve lives; and bring people together.

As a Mayor, it is exciting to watch this happen in my community and an increasing pace

Municipal governments are your natural partners. We will be the leaders of the 21st Century.

Our most important role – as national and state governments are increasingly embracing the policies of division and closing off borders – is to remain open, inclusive places where everyone is welcome, where ideas can collide, and where innovation can thrive.

Cities will continue to be where the promise of the Canadian Dream remains strong.