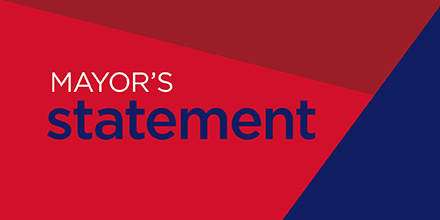 “Looking back on 2017, Council, staff and our community have a lot to be proud of. Working together, we are building a brighter future for Mississauga.

“Council continues to work well together, shaping a vision for Mississauga as a leading urban, world-class city. We are building off the work done during our first 40 years as a city and putting in place foundations for the next 40 years, and beyond. We are investing in transit to connect our residents and communities to the wider GTA region. We’re building affordable housing, reshaping our communities to be more livable and walkable, while at the same time protecting our environment, and we are making our city smarter by investing in new technologies and connecting our businesses and residents. And, we are building critical infrastructure to improve our already high quality of life and our local economy, including parks, trails, community centres, roads and bridges, and so much more. At the same time, we remain fiscally prudent, keeping tax increases at around the rate of inflation and providing good value for tax dollars.

“Council and staff are building a complete city with its own identity, one that welcomes people from everywhere in the world and provides them an opportunity to succeed. In many ways, Mississauga is the representation of the Canadian dream.

“There is a buzz about Mississauga. It’s a place people and businesses want to be. For the 14th straight year, Mississauga retains its Triple-A credit rating. We secured new foreign-direct investment opportunities from our international Economic Development Office (EDO) investment missions including Tohmei Industries, a renowned Japanese aerospace company. The arrival of this company was announced following our Japanese EDO Investment Mission in October 2017.

“We are on track to get construction underway in 2018 to build the fully funded Hurontario Light Rail Transit (LRT) system. The 20 kilometer – 22 stop LRT – will connect GO Train stations from Port Credit and Cooksville. It will loop around the downtown and be plugged into MiWay bus service and the Square One GO Bus Terminal. We recently opened the Renforth Gateway, the most eastern station on the Mississauga Transitway and the final stop on the 18km, 12 stop transitway. The BRT will link the business districts in Meadowvale, City Centre and the Airport Corporate Centre and dramatically reduce travel time across the city for commuters. There are over 100,000 jobs along the BRT corridor.

“Mississauga’s growing residential and employment population reinforces our advocacy efforts to bring about all-day, two-way, GO Train service on the Milton and Kitchener lines with our Missing Link plan. All-day, two-way GO service on the Milton Line remains a top priority as Mississauga is now a net importer of jobs and in need of service both ways, all day. Over 77,000 people are employed along this corridor, including 46,000 in the Meadowvale Business Park alone. Improved transit service is critical to our city’s future. It continues to be at the heart of our government relations efforts. I have raised it directly in meetings with Prime Minister Trudeau and Premier Wynne over the past year, and will continue to do so at every opportunity. It is now a council priority. It is also a priority for the Ontario government and Metrolinx.

“Like the private sector, we’ve built the Lean process into the City of Mississauga’s corporate DNA to ensure we look for savings and more efficient ways of delivering services. Budget 2018 projected savings of over $3 million of taxpayers’ hard-earned money. This means a savings of nearly $52 million over the past decade.

“In our efforts to make government work better and be more transparent and accountable to taxpayers, we introduced recorded votes for all Council votes. Recorded votes improve the way we can engage and inform residents about the city-building decisions and actions taken by Council and staff.

“We’ve also put more of our services online to make it easier for consumers to do business with the city. For instance, by using E-Plans to submit planning applications, we’ve reduced by 42 per cent the number of days it takes to review and approve an application.

“We are pressing ahead with a sustainable social procurement policy that considers social, ethical and environmental factors in the purchasing process, along with price, quality and service – the entire cost of a product of service. It ensures that purchasing decisions favour environmentally preferable goods and services, and view unethical vendor practices as unacceptable. It takes into account the sustainability factors of goods and services and the practices of suppliers along the supply chain.  This initiative is part of our broader efforts to stand up and safeguard our local environment for future generations with the launch of the City of Mississauga’s Climate Change Action Plan.

“This year we also launched – Making Room for the Middle – Mississauga’s bold new housing strategy to increase the supply of housing for middle income earners – the workforce that drives our local economy. It’s critical to our growth that people can both live and work in their community and not be priced out of the market.

“We continue to press ahead and implement a series of community consultation plans that are shaping neighbourhoods throughout Mississauga. From Vision Cooksville, to Inspiration Lakeview and Inspiration Port Credit; from My Malton – to the Ninth Line Lands – to Dundas Connects – to Britannia Farms and our Downtown21 Plan; Mississauga is growing and building new communities connected by transit and trails; home to parks and community centres, public spaces, and an unrivalled quality of life.

“We have so much to be proud of in Mississauga and we have only just begun.”