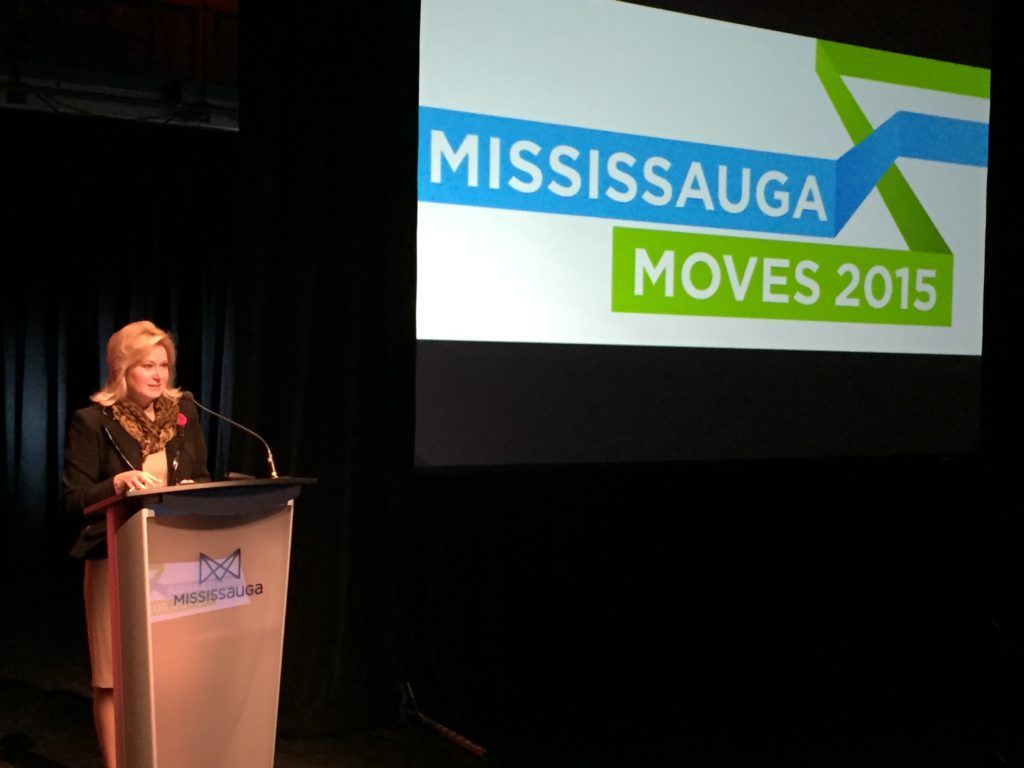 “Working together with Council and staff we are capturing ideas and transforming them into real results.

“Today is about ensuring our future transit planning efforts continue to be shaped by the progress made during the Mississauga Moves Transportation Summit from November 2015.

“We heard a wealth of solutions from residents to move people and our economy forward.

“It’s our roadmap to ensure we envision – and achieve – our future transit needs.

“At this session, we are asking for insights from those in the business of getting passengers where they want to be and getting deliveries and shipments where they need to be.

“Together, we will discuss how to prepare for change over the next 25 years.

“Whether it’s a small business or a Fortune 500 company – I repeatedly hear that the private-sector wants public-transit built.

“By some estimates – gridlock is costing the Toronto Region’s economy up to $11 billion a year.

“Being plugged into an extensive public-transit network means companies can reach far and wide to recruit the best; hire the best; and compete with the best.

“Regionally-integrated is about going beyond city limits to become a limitless city.

“When we invest in transit, we’re investing in the economy.

“Ensuring current transit initiatives – are integrated into future ones – is a top priority.

“For instance, we continue to work with businesses at the Aerocentre – in the Airport Corporate Centre – and across the City – to find ways to address the first and last kilometer problem.

“We are also working closely with the Greater Toronto Airport Authority to help advance plans to transform Pearson International into a mega transit hub; the Union Station of the Western GTA.

“And we regularly meet with businesses across this city to hear about their transit needs and how we can improve service to improve their business.

“If we’re going to convince people to get out of their cars, we have to make public transit seamless, affordable and efficient.

“We are achieving this goal as we press ahead with Metrolinx to build the Hurontario Light Rail Transit plan.

“Over the next two decades, Peel will need to accommodate approximately 150,000 jobs and over 300,000 people, many who will work and live along Hurontario.

“We’re on track to get shovels in the ground and construction underway next year.

“It will loop around the Downtown and be plugged into MiWay.

“While the BRT has become an essential east-west service; the LRT will be the north-south spine of a regionally-integrated rapid-transit network.

“The Renforth Gateway is almost complete, and when opened will be the eastern most bus station to open along the Mississauga Transitway.

“Commuters and companies are depending on the LRT and the BRT – two intersecting transit lines that are part of the larger, regionally-integrated transit network.

“Residents from Lisgar, Meadowvale, Churchill Meadows and across the western GTA – rely on it each day to get to work.

“We have become a net importer of jobs – yes, more people come to work in Mississauga daily than leave.

“We need to move people from Toronto into Mississauga for work.

“This demand reinforces our bigger efforts to boldly transform the GTA and Central Ontario with the Missing Link; our plan for all-day, two-way, GO Train service on the Milton and Kitchener lines.

“We’ve traveled a long way in a short time.

“All-day, two-way GO service on the Milton Line remains our leading transit priority. It’s critical to the growth of our City and our businesses. It’s at the heart of our government relations advocacy efforts.

“Mississauga is making investments in our local transit to augment the investments being made in our rapid transit lines.

“Our future success as a city relies upon our ability to move people and goods efficiently and effectively.

“You need only look at our highways and roadways to know that congestion is constricting our local economy.

“We need to take action now to change how we move, so that our businesses can remain competitive and Mississauga remains a top international destination in which to invest.

“As we look toward our future planning needs, it is fundamental that we all of us to take ownership to make Mississauga an even more dynamic place to pursue one’s dreams.”