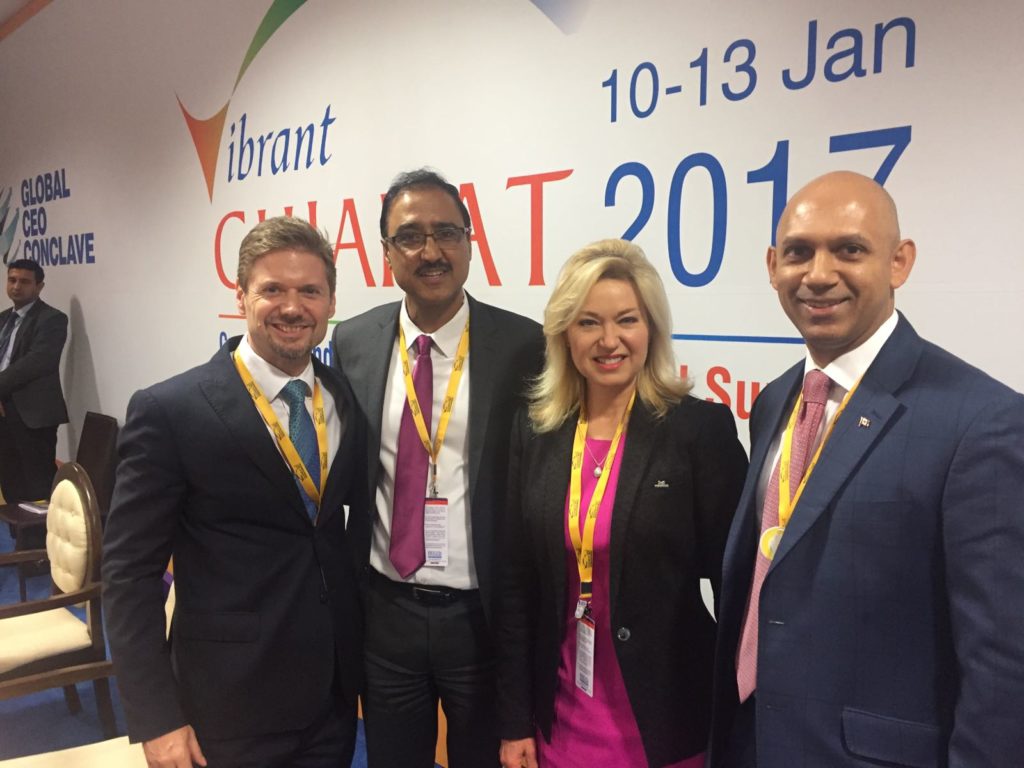 In addition to our Indo-Canada Chamber of Commerce delegation, Canada was well represented at Vibrant Gujarat by a number of important thought leaders including: Canadian High Commissioner Nadir Patel; Amarjeet Sohi, Canada’s Minister of Infrastructure and Communities; and Jordan Reeves, Consul General of Canada to Mumbai.

This year’s theme – connecting India to the world – was only fitting. In addition to our Indo-Canada Chamber of Commerce delegation, Canada was well represented at Vibrant Gujarat by a number of important thought leaders including: Canadian High Commissioner Nadir Patel; Amarjeet Sohi, Canada’s Minister of Infrastructure and Communities; and Jordan Reeves, Consul General of Canada to Mumbai. Keynote speeches were delivered by titans of industry and Prime Minister Modi.

Our delegation met with leading figures including Venkaiah Naidu, India’s Minister for Housing and Urban Poverty Alleviation and Minister of Information and Broadcasting, as well as Vijay Rupani, Gujarat Chief Minister.

During different networking sessions hosted by the Government of Canada’s foreign affairs office, along with the Indo-Canada Business Chamber and the Federation of Indian Chambers of Commerce and Industry, I had the opportunity to deliver keynote addresses, and take questions, from 200 potential investors looking for opportunities to invest and expand into Canadian communities.

In particular, there was great interest in Mississauga’s thriving aerospace sector and best practices for creating smart cities.

Pearson is home to more than a dozen cargo airlines serving over 180 destinations and 33 million passengers annually. It is fitted with over 240 truck loading doors and a million square feet of on-airport warehouse space. Over $31 billion of goods are processed annually through Pearson’s port of entry.  The aerospace industry employs over 24,000 people in over 220 aerospace companies, and Pearson continues to be Mississauga’s largest employer.

These keynote addresses were also opportunities for me to share the City of Mississauga’s use of technology improve the delivery of public services – and cement its reputation as a smart city. In fact, I wrote a guest column about our best practices in Municipal World Magazine last year.

In June 2015, council unanimously approved a new open data program. Open data is public information that is accessible and easy to understand. The data is unrestricted by copyrights, patents, or other mechanisms of control. Mississauga’s open data is free because everyone has a right to access it – from students to entrepreneurs. Open data is allowing the city to build on its already informative, popular, and successful apps and online services.

Vibrant Gujarat was a gathering of passionate thought leaders and an opportunity to collaboratively toward bringing government and business closer together to achieve results.