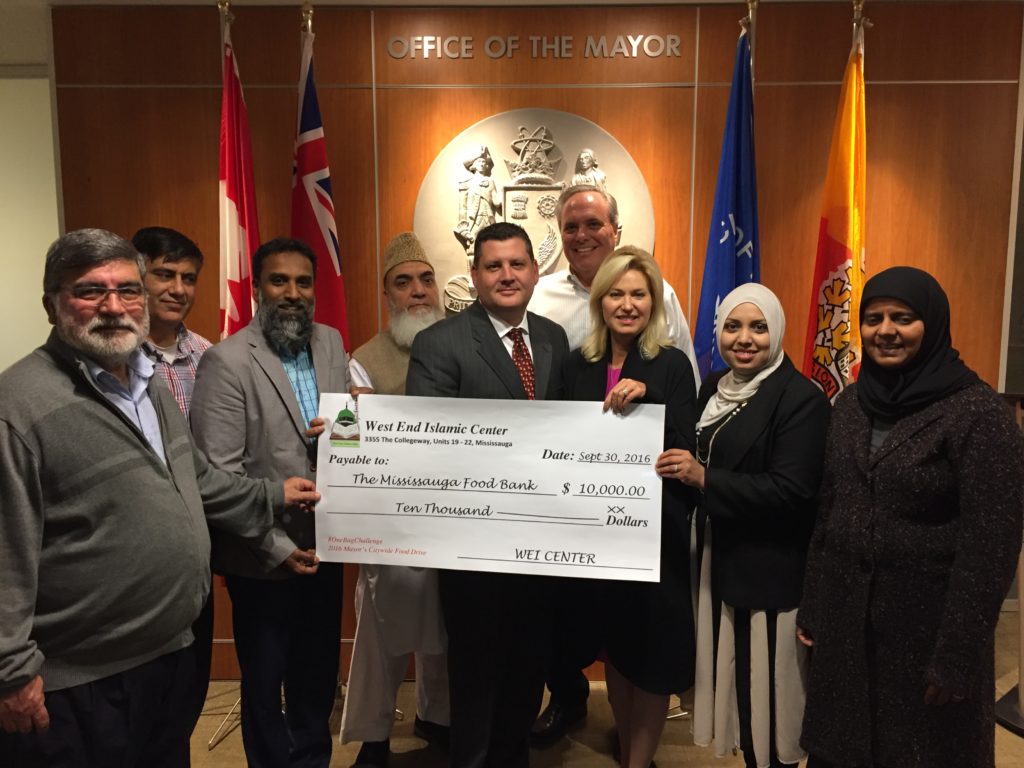 Mississauga –  We are overwhelmed by the incredible generosity shown by the entire faith community from the West End Islamic Centre, who have come together to donate a remarkable $10,000 to The Mississauga Food Bank, as part of our 2016 Mayor’s Citywide Food Drive #OneBagChallenge, Mayor Bonnie Crombie said.

“Last year we well surpassed our fundraising and food donation goals and this year, with the support of people from organizations like the West End Islamic Centre, I know we can do it again,” Mayor Crombie said.

Mayor Crombie made the comments during a ceremonial cheque presentation held at the Mayor’s Office with members and leadership from the West End Islamic Centre, along with Ward 8 Councillor Matt Mahoney.

Councillor Mahoney, who represents the West End Islamic Centre at City Hall, said ”donations like this will offer assistants to our residents to put food on their table for their families and ensure our breakfast programs are well taken care of.”

“Many of our most vulnerable residents are often the same individuals who rely on foodbanks, like The Mississauga Food Bank,” Mayor Crombie said. “Our 2016 Citywide Food Drive is a combined effort that is working toward supporting The Mississauga Food Bank’s Annual Thanksgiving Campaign in partnership with the City’s Fire and Emergency Services team.

“There’s still plenty of time to get involved. I encourage all residents to take part in the #OneBagChallenge.”

To get the ball rolling, Mayor Crombie recently took to social media and released a #OneBagChallenge’ video nominating 5 people to make a donation to The Mississauga Food Bank within 48 hours. Once the nominated person has either donated food or made a donation online, they are asked to post a picture or video on social media showing that they participated and then challenge five other people to do the same.

Residents are asked to drop off non-perishable food donations at their local fire stations, grocery store or The Mississauga Food Bank. This year’s Food Drive Challenge aims to raise $100,000 and 200,000 pounds of food by October 14.

Mississauga residents are encouraged to bring their food or fund donations to the free ‘Family Thanksgiving Celebration taking place this Saturday, October 8 at Mississauga Fire and Emergency Services Headquarters at 15 Fairview Road West.

I want to thank everyone in advance for their willingness to participate and their compassionate generosity to help neighbours in need,” Mayor Crombie concluded.